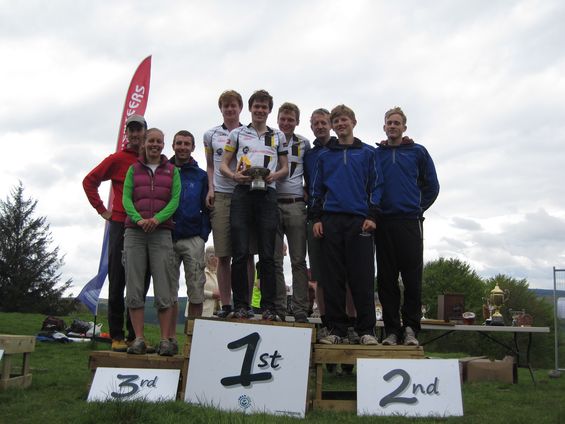 There were some more great performances from Forth Valley Orienteers at the Scottish Relay Championships on Sunday 26 May at Maxwelton Estate near Moniaive, Dumfriesshire.

Unfortunately no FVO teams were victorious, but there was some exciting racing and that is what it's all about.

In particular, there was a great performance from the first team in the men's open competition, especially considering original team member Will Hensman only realised his sprained ankle was not going to be race ready on the morning of the race. Significant changes had to be made: Mark Nixon would move to last leg with young Daniel Stansfield promoted to the first team, first leg. And an excellent substitute he made too with a competitive run to 4th place, although just not quite able to keep up with the very top runners after a long, hard season.

Nevertheless, FVO were very much in the thick of things, especially when Roger Goddard characteristically stormed round to set the fastest time of lap two and send out GB international Nixon to chase down Sheffield University's Men of Steel. And chase them down he did! By the tenth control he had caught Welsh GB international Kris Jones 40 seconds and a great battle ensued. Unfortunately, Kris just had too much for Mark on this day and second for FVO was the result. Meanwhile, the second FVO men's open team were a respectable 6th, with Tom Ryan continuing to make progress on his comeback trail and Ross McLennan managing not to injure his fragile calf some more.

In the junior categories there were some unfortunate mispunching incidents, but Jamie Goddard did amazingly well to come back in 4th after losing his shoe at the start whilst teammate Lizzie Stansfield continued her great form with the fastest time on the third leg.

Finally, standout performance of the day went to Gary Longhurst as he stormed round his course to be the first back from all relay classes, but there was little his teammates Dave Coustick and Louise Longhurst could do against much stronger runners.