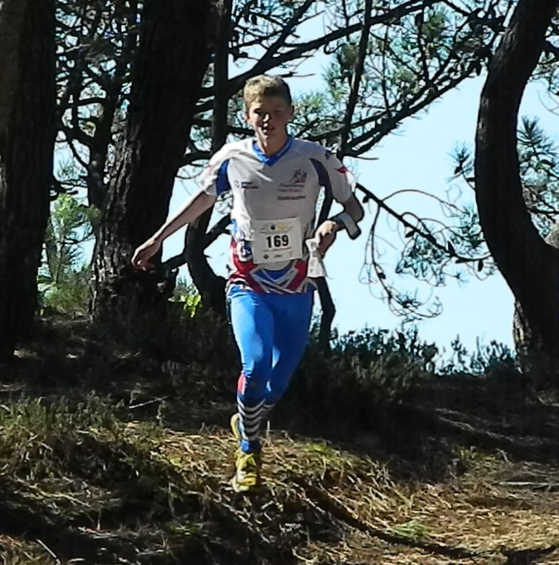 Daniel Stansfield was selected to compete for Great Britain in the M16 category at EYOC 2013.

This is a serious junior competition with the top runners from over 30 nations competing in MW16/18. Sprint, long and relay competitions provide an experience of international competition. Competition results throughout the earlier part of 2013 were used to select the top 4 people in each category from across the UK. Selection based on specific competitions meant that there was a need to be able to perform exceptionally upon demand.

The key selection races were on 3 days of the Scottish 6 day competition with a focus on contour detail which would be a major challenge at EYOC. Daniel pulled off some excellent performances, beating the almost unbeatable Sasha Chepelin on the 6th and final day to secure his position in the GB team. The Scottish Junior Orienteering Squad supplied all 4 competitors (Daniel, Sasha, Andrew Barr, Callum White) in the M16 category and the only W16 (Jennifer Ricketts) selected to represent Britain.

The step up in seriousness of the competition for the M16s was emphasised by the talk of prerace preparation, tapering of training, development of strategies to cope with difficult situations and a preparation weekend in Anglesey involving a flight and a 4 hour train journey. An additional trip to Forres for training in Culbin’s contour-rich sand dunes at 1:15,000 was to prove invaluable. This was organised by the M/W16s themselves.

On return from the preparation weekend the full GB kit was modelled, including both sprint and cross-country orienteering gear. Swanky to say the least.

EYOC 2013 arrived, flights to Manchester for a team gathering, flights to Lisbon, bus to accommodation.

The sprint was in the old quarter of Obidos. Competitors with an obsessive streak had combed the internet for visual information on the town, examining every image available. Perhaps this obsession is a key. Daniel set off as the absolute first start in the entire competition straight into the maze of streets. Perhaps the excitement and the pressure got to him, but tiny missable alleyways led to confusion and a minute and a half wasted. With such stiff competition this meant a plummet to the bottom of the ratings and a sobering introduction to such high level competition.

The next day was the long competition with the promise of some seriously detailed contours. Daniel had a late start and was able to gather himself for a controlled attack on the course.
A finish in 17th place out of 85 of the best youth orienteers in Europe! An excellent achievement and if only he had not made those couple of minutes of mistakes...

For the relay only 3 of the M16s could be selected, but fortunately Sasha was pushed up to run for the 18s (running first leg to finish an exceptional – gut busting – 4th position) so all got to run.

Excellent performances by Andrew coming home in 7th, and Callum bringing them up to 6th set Daniel up for a podium position on the last leg. Daniel pulled it off, chasing down one team, but being overtaken by an arch rival from Hungary, to maintain the 6th position and the last slot on the Podium for Team GB.

A very serious international competition was rounded off with a night of socialising with the other squads...

Daniel would like to thank the BOF Team GB coaches – Liz Furness, Paul Murgatroyd and Jackie Newton – for the fantastic experience.

Daniel could only have achieved this level of orienteering competence with the huge input of the Scottish Junior Orienteering Squad – Maureen Brown and Bill Stevenson. The regular weekend trips and life enhancing biannual summer tours provide an exceptional environment for development of orienteering and of personality.

Daniel would also like to thank FVO for supporting his competition attendance throughout the year and of course laying on all those night events to help him achieve the maximum of 60km per week that he has been limited to!! 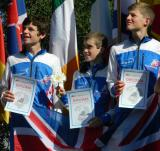 Daniel on the EYOC2013 Podium