Bumper Crop for Forth Valley at Harvester Competition 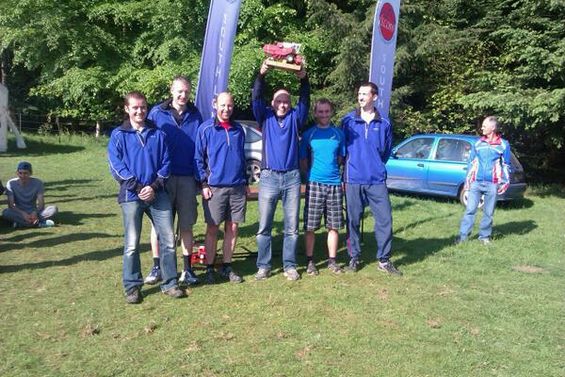 Forth Valley Orienteers continued their excellent form this season and combined to reap a bumper crop of trophies at the Harvester overnight relay race, which took place in the scenic Surrey Hills over the weekend of 17/18 May.

The long journey south to the second UK Relay League race of the year was well worth it for the dedicated FVO team; with a dominant overall victory for the men and a first ever win for the ladies the outstanding outcomes.

The format of this prestigious race is very similar to the legendary Jukola race in Finland - an all night, overnight, relay for teams of seven. First held in 1978 in the UK, overall victory had proven elusive to Forth Valley until 2009, when a brave team performance in the treacherous pits in the open fells of Wales saw them secure a famous victory.

This year, at Winterfold, venue for last year's British Championships, the race would start at midnight on Saturday, with seven legs of between 5.7 and 11.6km to complete, finishing around 6.30am on Sunday morning. It was a beautiful, clear night, but the bright moon would be little help under the thick forest canopy. Many controls were in small, difficult-to-find features, so with no reflective markings and rough underfoot conditions in much of the terrain, running hard round paths to definite attack points was definitely the prudent tactic.

Will Hensman was chosen to lead off the strong FVO team, but his participation was in doubt right until the day of the race - a calf injury the latest in a series of unfortunate setbacks this season. Thankfully, the calf held firm and so too did Will's night navigation technique with a solid run to 3rd place setting things up nicely for the team.

It was up to club captain Jon Cross to chase down the leading Nottingham runner and he did so with gusto: "Will was right in the race on first leg and handed to me in 3rd, 8mins behind Nottingham but only 45 seconds behind local club Southdowns and a posse of 4 teams in the minute or so behind. I was keen to get away from the chasing torches. Too keen... I missed #1 and #2 and both times the torches behind were very visibly converging on me. Still, I pushed on and caught Nottingham at #6, by #9 I had opened a gap and I was on my own after that."

This was great work, as Jon was now handing over to FVO's secret weapon; former World Champion and current British number 1, Graham Gristwood. Graham put in a typically world class performance of controlled but aggressive orienteering, taking just 58 minutes to complete the 10km course in the dark of night.

This was the crucial part of the race and it was the turn of Irish international Marcus Pinker to consolidate the team's now 13 minute lead. This he did with aplomb, with the fastest time on his 8km leg 4 course.

Ross McLennan was next up on the challenging 10km dawn leg - starting in the dark, finishing in the light, testing not only night and day navigation but adaptability too. Ross said of his run, "I knew we had a good lead, so it was time to play the percentages; make sure the routes were super safe and use rock-solid attack points." This belt and braces technique paid off and, with the Nottingham runner losing over 20 minutes early in the course, the team's lead was now well over half an hour.

Jon Marsden was able to put in a similarly safe performance on the sixth leg and then club president Roger Goddard brought home the bacon with another steady performance for Forth Valley's third Harvester victory in six years, almost certainly the most comprehensive yet.

It was a different story, though, in the competitive ladies race. FVO were fielding a strong team, but it was very much anyone's race.

Scotland team stalwart Fiona Berrow kicked things off for FVO at 1.30am. She found some of the navigation on her 6km course challenging, but persevered to come home very much in the mix, only a few minutes down on the leading ladies team.

Janine Inman was next and, although she too lost time trying to find some small depressions, everyone else did too and she was able to pull up a number of places, proving she's back to top fitness ahead of her epic quadrathlon in July.

Frances Brown then had a storming run on the short leg and pulled the team through into the lead on her 3.7km leg 3 course. Rosalind Hussey kept the team in the mix on leg 4 with an exciting battle with Southdowns, first losing and then regaining the lead at least once.

It wasn't much of a lead though that she gave Hungarian international runner Fanni Gyurko - only 20 seconds after four hours of running! However, Fanni recently came back first in the very prestigious 10Mila race in Sweden and she continued her great form to stretch that small lead to a huge 8 minutes and earn FVO a first ever victory in the ladies category of this great race.

Truly a Harvester to remember, hopefully sowing the seeds for a memorable 2014 season for this crop of talented athletes.

This spring there is a series of fun local events every Wednesday evening – find out more on our events page. The next event will be taking place at South Achray on Wednesday 21 May. £5 for adults and £3 for kids – please come along, all welcome and coaching for beginners is available.

Check out the photos in the Harvester 2014 gallery. 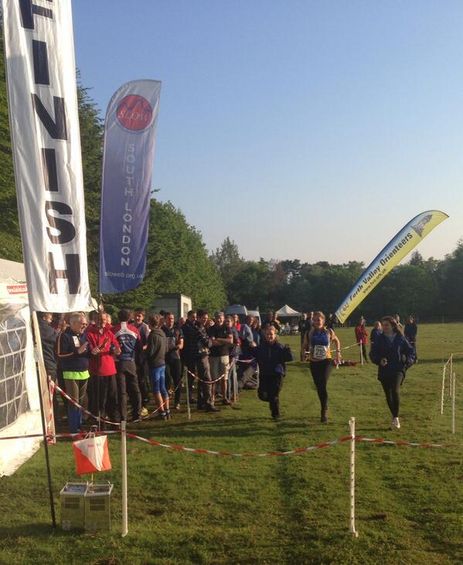