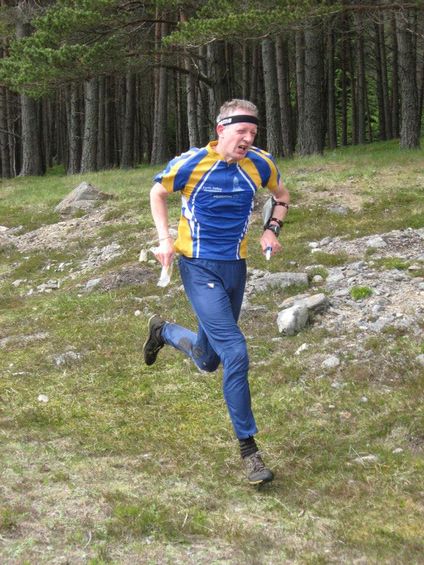 Roger at the last control

This report details another successful and enjoyable year (2015) of orienteering for FVO.

For the first time in FVO’s history the club won the big clubs competition at the Compass Sport Cup, national competition. The club was highly visible on the day sporting our new club training tops, giving us a great presence at the event, with 80 members making the trip. There were some great performances on the day including 5 class victories, with everyone helping us take victory.

Our Captain Jon Cross was hugely successful in signing up all our runner to travel down to Kendal. Transport and entries were paid for by the club, to help maximise numbers. Jon Cross was awarded lifetime membership of the club to recognise his efforts as club captain.

There was success for FVO in the other main orienteering races of the season with highlights which include:

We had 4 members of the club representing their respective countries in the World Orienteering Championships in Scotland, well done to Graham, Fanni & Marcus.

Most outstanding individual performance through the year was recognised at the dinner dance with Grace Malloy awarded athlete of the year for her outstanding performances at the world orienteering school’s championships and winning the Scottish 6 days with very stiff competition this year.

Congratulations and thank you to everybody for contributing to the club’s success.

2016 was a big year for the club along with BASOC putting on day 5 of the 6 days. This proved to be a very challenging day with difficulties with parking. All club members pulled together to ensure it was a successful day. I would particularly like to say thank you to Gareth and David for all their efforts to ensure the event went ahead. Without their intervention the day would not have happened. I would also like to thank all our members who gave up on running to help on the day.

The next day, club members Steve Nicholson and Brian Bullen planned a highly praised Classic distance for the World Orienteering Championships on Glen Affric winning “World of Orienteering” course of the year.

We also hosted a weekend of orienteering in June branded the Schiehallion weekend, with a sprint race on the Friday and Middle distance on the Saturday. We also coordinated with Tay to hold a Classic race on the Sunday. The first two days where WRE and that helped to attract a number of international top athletic and help the GB squad prepare for WOC.

I would like to thank all the organisers, key event officials and helpers.

Ensuring there are regular training and local events for club members

We continued to provide multiple local events, including the Wednesday Evening and night series. Thank you to Peggy for her efforts on promotion and organisation of the WEE series, and also to Martin for organising another great night series.

We had a very successful ‘Come and Train’ Series which was well attended and which has helped to bring new members into the club. I would like to thank Jen and the coaching team for all their efforts on putting on some great events.

Graham ran a series on coaching sessions in the autumn which were very well attended. This has shown that there is a strong appetite for middle of the week training and regular events held throughout the year, and the committee is keen that we expand the programme into 2016.

The FVO Dinner Dance at the Victoria Halls was another superb evening, with thanks to Louise for once again organising.

Looking for opportunities to promote the club and attract new members

Our total membership is now 152, up from 135 in 2014. Following an intense period of activity by our club captain during the CompassSport Cup transfer window, we had 121 eligible members (M/W12+) versus the 125 threshold to be a Big Club.

The increase of membership and attracting members from other clubs is down to us keeping a high profile at events. We have tried to raise our profile locally such as the Schiehallion weekend, but more consistent and focused promotion is needed to make a difference. This is something we will looking to address next year.

Having new faces in the club is very welcome and this really helps ensure the future of the club.

The Treasurer’s report outlines that the finances are in very solid shape, with cash book balance of £13,491 which is well above our stated target contingency of £5,000.

This was driven by more income from events including the Scottish 6 days, Schiehallion Weekend, and Scottish Championships; increased mapping expenditure more than offset by £7.2k of mapping grants in 2015. £3000 of the balance is earmarked for mapping projects not spent in 2015.

We have once again been very active in mapping and we now have new maps of Bannockburn, Kings Park, Cowie, South Achray and Dumyat.

Next year we will also focus on renewing more of our older maps that we frequently use including; Barr wood, Mine Woods and Abbey Craig. We will also be actively looking for a large area, and have the funds available.

The club has subsidised the Compass Sport Trophy qualifier, finals and relay events and athlete support worth £3K.

Reflections on the year and year forward

Great performances throughout the year; staging two World Ranking Events, and one of the largest 6 days events ever; and we have been very successful at winning grants, which we are investing in our maps.

Looking forward into 2016; there is lots of activity planned for the year, with FVO hosting the CSC in March, Junior European Championships in the Autumn and a WRE Sprint in July. We will also be running the WEE series, and regular training events, as well us defending the Compass Sport Cup which will be an even bigger challenge with the event being hosted by SYO in their own back yard.

We are also in the process of getting a grant from Direct Club Investment funding from Sports Scotland to have a part time professional officer, to help build coaching, events programme, local promotion and recruit new members.

Finally, I would like to personally thank the committee for their hard work, and our members for their continued input and energy throughout the year. Thank you to Gareth for 5 years as treasurer who will be stepping down this year.

It was difficult to pick out one person from the many people that have done a huge amount for the club, this year. However, there is an individual who has provided consistent support for a number of years, and has been at the heart of the club week in week out, which is what this award is all about. This person is always proactive at helping on SI, putting on evening events and looks after all our local events results. Also in 2015, the recipient spent a large amount of time travelling up to Rannoch making many changes to meet landowners and difficult access requirements for day 2 of the Schiehallion weekend. I’m delighted to announce The Jim Heardman Trophy goes to Will Hensman.