S6D 6 - A Hundred Medals and All and All 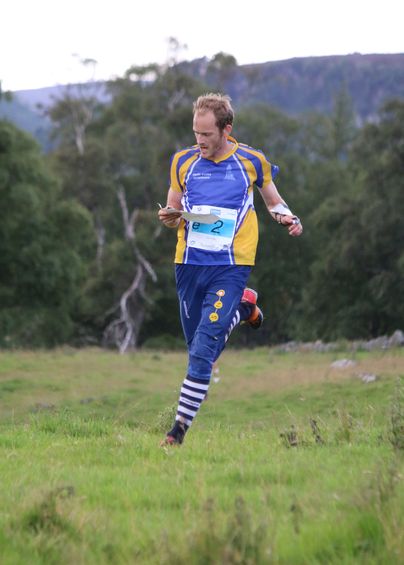 Fifteen series medals added to 17 stage medals from the final day at the Scottish 6 Days Orienteering Festival to bring the FVO haul for the meet to a stellar total of 106.

A gold medal for Mark Nixon on the final day of the Scottish 6 Days Orienteering Festival wasn't quite enough to reel in Alastair MacLeod, as he had to settle for the overall silver medal in the elite mens class. Mark's time of 67.37 brought his third medal of the week as he was never headed on the course, but MacLeod's three top finishes earlier in the week meant a ten minute overall winning margin.

Mark was one of three FVO athletes to top the podium on the last day/ Jason Inman turned in his best performance of the week to scoop the M45L race in 53.24, while Chris Wood added the icing to the gingerbread of a great week for her, taking her fourth gold of the week, and sixth medal overall to seal victory in W70S.

On a day of standouts at Glen Feardar, a number of athletes had their best performance of the week on courses beautifully planned by Ben Stansfield. Will Hensman took the silver medal in M35L (59.41) and Roger Goddard had the silver in M40L (55.35).

Fanni Gyurkó knew that only her best performance would be sufficient to make an impact on the W21E leaderboard, and she gave it everything, outpacing the GB forest team of Jess Tullie and Cat Taylor with a time of 67.05 good enough for silver behind Megan Carter-Davies.

Peter Molloy led M16A for a considerable part of the day with 42.43 before local hero Matthew Gooch, running on his home terrain, pushed Pete back into the silver medal position. There were shades of the Generation Game, as Rona Molloy bookended her week with another medal, silver this time, in W45L (48.42) while Lucile MacLeod took her third medal of the week, another silver, in W75S (35.24).

Grace Molloy was the big winner in the overall placings with first place in W18L coming off the back of a similar place in the Swedish O-Ringen, but she was one of four athletes to take top honours in their class.

Martin Dean had the M60S title wrapped up in four days and may well have been pounding a golf course today. Chris Wood topped W70S in style, while Ewan Purves emerged victorious from an epic battle with an Irish athlete in M16B.

Lucile MacLeod rolled back the clock to return to a winning podium for the first time in a while with the silver medal in W75S, while at the other end of the team spectrum, Peter Molloy claimed silver in M16A. There were Silver medals too for Mark Nixon (M21E) and Rachel Hendrie (W20S).

There was a raft of bronze medals, some from athletes used to the heady heights of the podium and some from outstanding newcomers in their first big events. Roger Goddard (M40L) and Jason Inman (M45L) are no strangers to the winners step, but will be delighted to have maintained their consistency at major championships. Fiona Hendrie was top Brit in taking bronze in W55S, while Hazel Dean scored the bronze medal in W50L off the back of her first four days results. Some new names on the FVO winners roster at this event included Rory Spenceley (M14B), Kirsty Flint (W12B) and Emily Nicholson (W18S) but all three come from excellent orienteering pedigree, so it may not be the last time we see their names feature on the roll of honour.

However there were no failures on the week. It might have rained from time to time. There might have been waist-deep heather and huge boulders and cowpat in the gathering field. There may have been days missed with injury or to protect injuries. But none of the 111 FVO athletes (and that's three quarters of the club) will have come away from Deeside with anything but great memories of what was a superb week for orienteering.

Plans for the 2019 Six Days are already taking preliminary shape. And this time it's on our park, as FVO are the lead club for the event, which will take place in Strathearn.