All Around the World (well, the UK at least!) 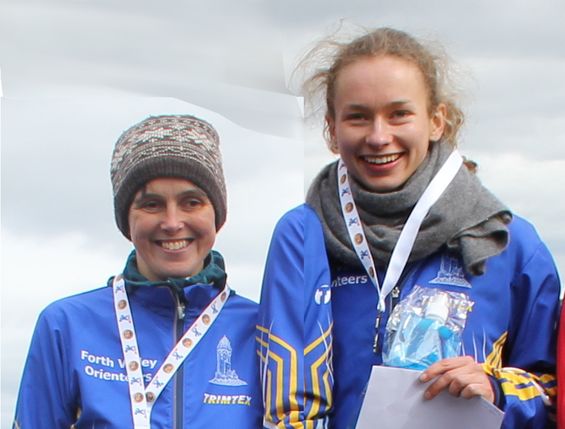 As the 2017 season gets into full swing, it's been a successful week for FVO athletes, with race wins at no fewer than nine competitions across the UK.

Kirsty Bryan-Jones rolled back the years in taking victory in 56.16 on the Blue course at the Shining Cliff race hosted by Derwent Valley. Kirsty finished more than 90 seconds ahead of the field, and some ten minutes up on her nearest competitor in the Veteran Women class. Anastasia Trubkina took on the 13.4km Black course at the Concorde Chase, which is the traditional opener to the south of England season, and was first female home in a time of 86.20.

Marcus Pinker laid down a marker for his season's intentions in recording a 12 minute victory margin at the south Wales opener at Llangattock. The snowy conditions didn't hinder the Irishman, who "chugged round" (his words) the 6.3km in 44.13.

Many of the Great Britain team were on show at the Manchester Twin Peaks event, and Graham Gristwood demonstrated that even at 33 he is still the main force in British orienteering, scoring the win in the Black class in a time of 50.06. Jamie Stevenson was 10th in the same race (58.37).

Closer to home, Roger Goddard won the ESOC sprint championship in western Edinburgh. Goddard recovered an 8 second deficit from the morning prologue race, which was also a counter in the UK sprint rankings, to take overall victory by 90 seconds. Jon Cross was 3rd in the prologue. At the same event, Robert Neil and Fiona Hendrie were each 5th in the Super Veteran (55+) class.

Roger then followed this up with 2nd place at the STAG score event at Drumpelier, Coatbridge. Only he and former England team-mate Patrick walder managed to visit all 25 controls within the one hour time limit, but Walder was 34 seconds faster over the course to take the win. Fiona Hendrie was 3rd in the female category, in a time of 59.12.

Chad Harrison won the long race at ESOC's Hopetoun House event, in a time of 14.56, while Paul Hammond was 3rd in 17.43. Chad also ran in the medium race, but his blistering time of 11.31 was invalidated by a mispunch at the 10th control. James Hammond was the race victor in a time of 16.29 for the 2.45km course.

Lewis Taylor cemented his hold on top spot in the Forth Valley Night League with a win at Polmaise Woods. Taylor's second victory of the nine race series came in 42.21, five minutes up on Ben Stansfield who remains in 2nd place. The Short race was won by Jamie Goddard in 36.40, ahead of Zoe Nicholson (51.04) and Abbi Longhurst (55.36).

The week sees the first championships of the season, with both the Scottish Night Championships and the Scottish Sprint Championships taking place in Morayshire, and a strong local contingent is expected to feature in both events. However several elite athletes are off to Northern Ireland for the Armagh Sprint, in preparation for the World Championships in Estonia in July. Fanni Gyurko is strongly tipped to take the womens race, while Kris Jones and Graham Gristwood will lock horns with a strong field including Belgium's Yannick Michiels and triple Junior World Champion Tim Robertson, of New Zealand. 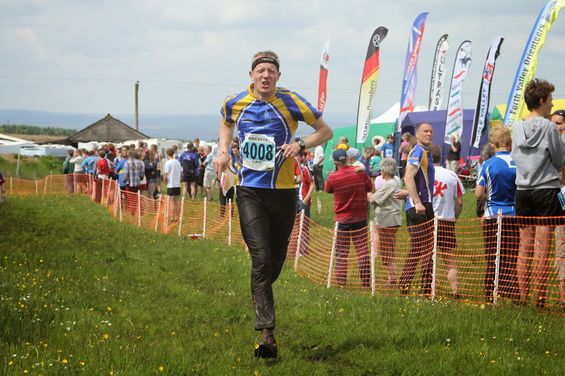 Roger strides into the relay finish 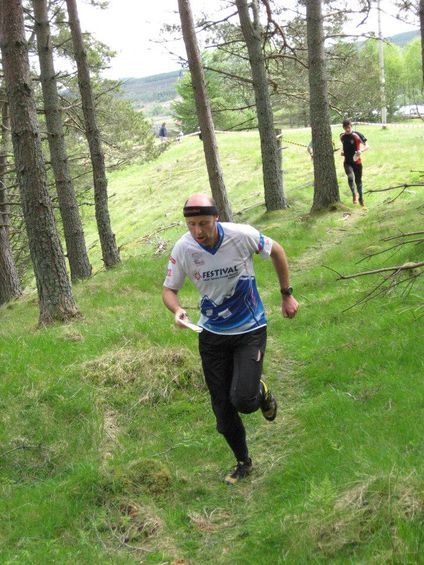 Marcus on the run through 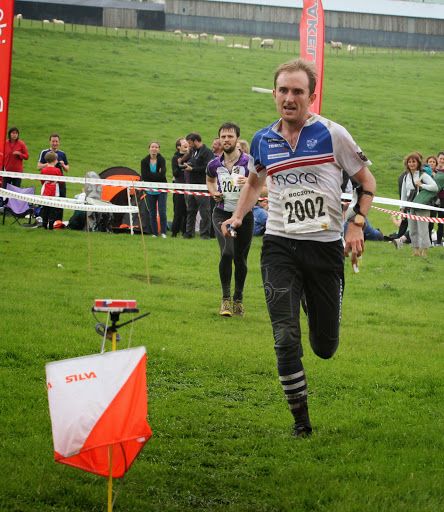 GG at the finish