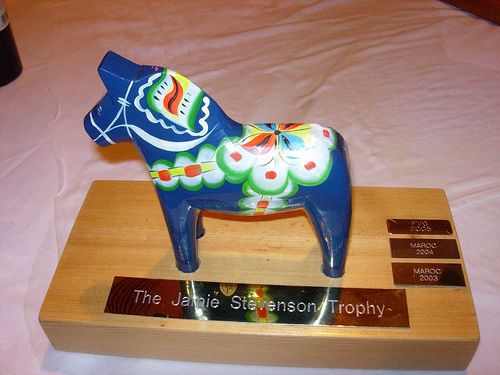 The junior stars of Forth Valley Orienteers put in a strong team effort to finish third in the Jamie Stevenson Trophy at Kinnoul Hill, near Perth.

The competition, named after four-time World Champion medalist Jamie Stevenson, is the premier junior team competition in the Scottish calendar, and has provided the starting point on the careers of many international athletes including current GB stars Hollie Orr and Alasdair MacLeod.

Competitors from 12 clubs lined up, with Aberdeenshire powerhouse Mar OC tipped to add to their impressive sequence of victories in the event, and this proved to be the case, as they established an eight point victory margin over Moravian and FVO, who were tied on 588 points from their best six scorers. The tie-break protocol was invoked, and Moravian's seventh best scorer, Mairi Weir, was ranked two places higher than that of Forth Valley, Kirsty Flint, pushing the Stiringshire club into third place.

Grace Molloy took maximum points in the Green girls event, while Pierre Lardet and James Hammond were second, in Light Green boys and Orange boys respectively. Jamie Goddard took the bronze medal position in Orange boys and Peter Molloy and Lizzie Stansfield were each fifth in their Green events.

A total of 21 local youngsters were in action, with several having their first taste of competition outwith the local framework. Full details of FVO performances on the day;