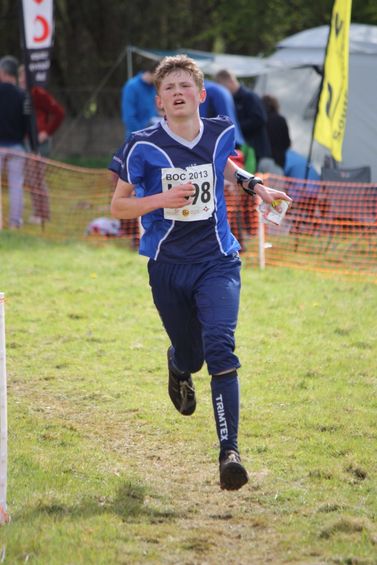 Daniel storming down the run in

The tiny Italian village of Transacqua proved a happy hunting ground for Dan Stansfield, as he returned from long-term injury to claim double sprint victories at the Primerio-O Festival in the Dolomites.

After nearly six months on the sidelines with a serious foot injury which scuppered any chances of a recall to the GB team for the Junior World Championships, Dan was clearly delighted to be back in competitive action, and managed to maintain 4 minute pace round the village course, saying afterwards "I was a bit unsure about my foot, but I ran hard, and it held up well. The stamina wasn't there today, but I was happy to win the course, and I beat the M18s who were entered as well as the guys in my class, so it was good to be back."

Dan's stage wins, in times of 20.09 at Transacqua and 16.33 at the neighbouring village of Tonadico wre the icing on the gingerbread for an impressive FVO contingent, with several other athletes showing up well in the sprint stages.

The focus then shifted to the forest stages, with the Long race on the course used for the 2009 Junior World Championships. Ben and Lizzie Stansfield had the best individual performances of the meet, with both finishing 3rd in their respective classes on Day 3 at San Martino di Castronozza, Ben in 60.21 and Lizzie in 35.31.

Roger Goddard did well to handle the pressure of competing in M35 for the first time in several years, having accidently picked up the wrong map on Day 1, and finished 9th overall in a competitive class, with a 5th place finish on Day 3 moving him well up the rankings. Ben Stansfield snagged 3rd place overall in M45 behind two Swedish athletes, while Clare Stansfield was consistent throughout the race series to take 4th place in W18.