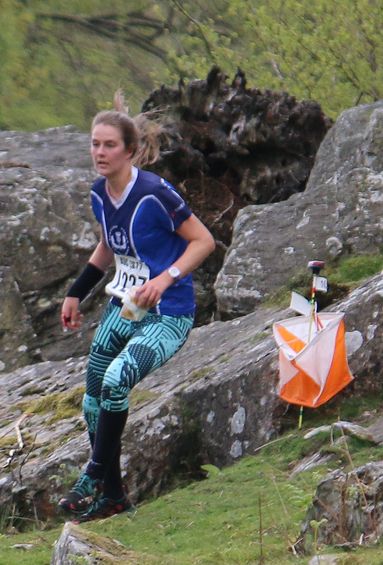 In a day of highlights, the standout performance came from Grace Molloy, who won the elite W18 class in 59.02, a time which would have won the W20E class as well. Having picked up three silver medals at the Jan Kjellstrom International Festival of Orienteering three weeks ago, Grace clearly knew that a fast time was possible, and went off like a train to lead from start to finish to head international team-mate Laura King (Airienteers) by almost three minutes and JK conquerer Fiona Bunn (Thames Valley) by close to four minutes.

Graham Gristwood defended his M21E title in style, with only Clydeside's Alasdair MacLeod proving serious competition. Gristwood was the only athlete to break the 100 minute barrier for the 14.9km course and finished in 98.45, almost five minutes up on MacLeod to put down a marker for the summer's international races. The most convincing winning margin of the day was posted by Euan Patton in the M14 B race, as he stomped out a margin of 15 1/2 minutes to take the title in 37.40.

There was double joy in the womens veteran classes, as FVO scored another two gold medals through the efforts of Kirsty Bryan-Jones (W45) and Hazel Dean (W50). Although neither is a stranger to the top of the podium, having been British champion multiple times, neither has been in racing form of late, with Hazel's last outing being in October 2016, and Kirsty having won her only race this year in February. Kirsty's winning time of 61.23 bettered Mar's Sarah Dunn, while Hazel was almost 90 seconds quicker than Sara Campbell (Deeside) in 61.01.