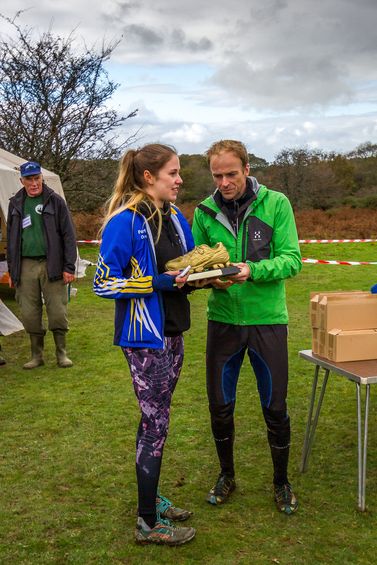 Despite four course wins and a Golden Shoe performance from Rachel Hendrie, Forth Valley's ten year winning streak in the Compass Sport Cup came to an end at Virtuous Lady, Devon, as the team finished runners-up to Bristol OK.

The 1000 mile round trip to the south-west of England proved a logistical challenge, and three of the Scottish qualifiers elected not to take up their berth in the finals due to the excessive distance, but a strong team of 46 athletes made their way to Yelverton aiming to claim the British Clubs Championship for a third successive year.

Rachel Hendrie was awarded the Golden Shoe for the quickest run-in on the womens courses, with a 17 second dash from the final control, defending the honour won last year by Fanni Gyurko.

Bristol, however, remained well in contention, and seized their opportunity in the UltraVet class, with three athletes in the top ten, and a host of points-blockers pushing the other teams down the scoring table. 13-time winners South Yorkshire had a late flurry in the Young Junior classes, but a 1st, 3rd and 4th places for BOK brought the decisive points, as Bristol's total of 2363 was 40 better than FVO, with SYO a further 27 points behind.

Team captain Jon Cross said "We knew it would be a tough ask to defend our title, as we were missing half our points scorers from last year for one reason or another. This year we would have needed everything to go pretty much perfectly on the day if we were to hold on to the title - to win we probably needed to eke out three more top five finishes.

I felt it was a decent defence of the Cup but BOK were too good on the day and beat us by 40 points to be worthy winners. Nonetheless it was a great effort by everyone for us to have 46 on the start list all the way down in Devon, and I think we put up a very honourable defence of the title."

FVO point scorers on the day were: