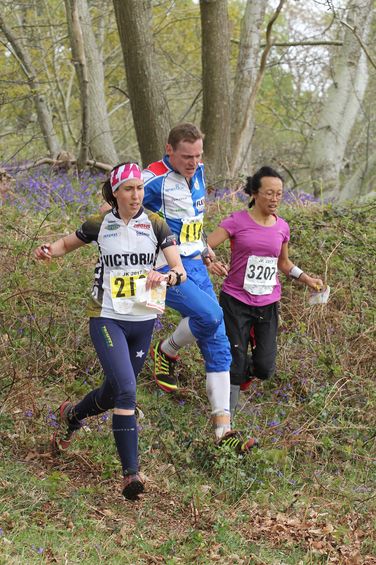 The Highland Wolf two-day event is one of the main highlights of the autumn orienteering calendar in Scotland, and Forth Valley athletes turned in some top-class performances to annex 12 podium places, including seven race wins.

Notwithstanding the absence of more than a dozen top medal prospects on international duty, the FVO challenge was evident from the morning race, a mass-start middle distance at Auchernack on the banks of the river Spey. Kris Jones made his first appearance in club colours since the Jan Kjellstrom festival in April, and claimed victory in the Brown category, coming home in 26.27. Mark Nixon was 6th in 28.52.

Martin Dean was on call for the Veteran Home International, being run on the same terrain, but having been released back on the morning of the race, posted 6th place in the Blue class (35.41). Similarly, Jon Cross was available for the domestic races, as his England team posted a clean bill of health, and Jon was quick on the Green course, winning the stage in a rapid 25.02.

The Wolf is unusual on the Scottish calendar, as it features two scoring races on the first day, and the 7th round of the BTO Solicitors Scottish Orienteering Urban League took the athletes back down the valley to the tight streets of Aviemore. Kris Jones posted his second win of the day, leading out a star-studded field in the Mens Open race in a time of 15.34. Chris Smithard was 14 seconds down in 2nd place.

The following day saw the action move to Inshriash, in the shadow of the Cairngorms, and there was further success for the FVO team in the Scottish Orienteering League competition. Mark Nixon won the Black class race (84.55) to defend his Highland Wolf title. Martin Dean was 2nd on Blue (64.15) beaten only by former FVO stalwart Steve Barrett.