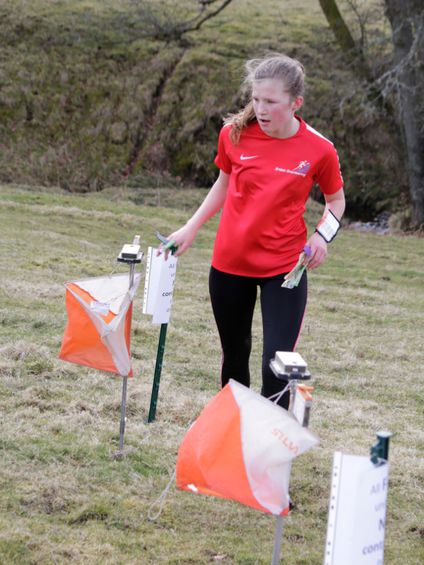 Lizzie Stansfield was crowned W16 Jan Kjellstrom champion after a stunning Long distance run pulled her to the top of the leaderboard.

Going into the final day in Bronze medal position, Lizzie turned up the afterburners in her preferred discipline, finishing in 43.48 to derend the Long title she won last year, and confirm her top ranking.

Clare Stansfield had her second win of the weekend to secure the W20S title by a massive 90 minute aggregate margin, finishing in 37.12, Such was Clare's dominance of the class, she could could have gone round her course twice more, and got most of the way round for a 4th time before the 2nd placed athlete caught her.

Grace Molloy was FVO's third gold medallist of the day, in W18E, (53.38) but was unable to assail the overnight advantage of West Cumbria's Niamh Hunter, and had to settle for her second consecutive silver medal place at the JK.

The last time Chris Smithard stood on a JK podium for a forest discipline, he was a callow M14, and few would have bet on him returning to the winners enclosure as an elite athlete. However, the formbook was summarily torn up and burned as Chris had the perfect performance, staying tight to the course to reel in several earlier starters, and post a time of 100.29 for both the Long distance silver medal, and the overall elite silver.

There were Long distance Bronze medals for Peter Molloy (M16 in 48.07) and Katie Hensman (W12B in 41.48) which confirmed both in 3rd place in their class, and also for Kirsty Bryan-Jones (W45 in 65.23), which secured the overall silver medal.

Matthew Inman had his best performance of the weekend with third place in the Yellow class, and Mark Nixon got in some race practice ahead of the relays with top spot in the Light Green classification having missed the entry deadline to compete in the age classes. Will Hensman was 4th today in M35, but had a sufficient lead from the Middle distance to take Bronze overall.

The JK concludes tomorrow with the traditional Easter Monday Relays.