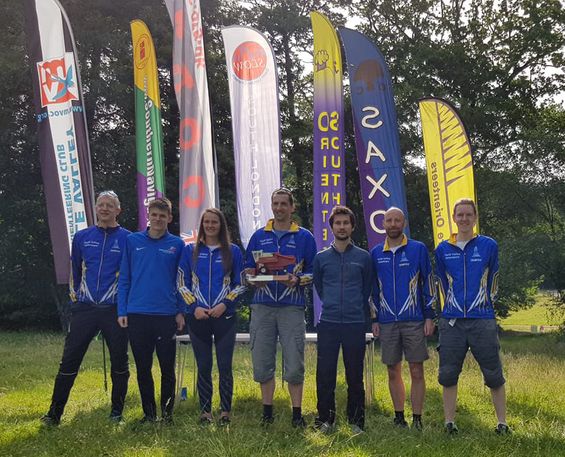 Forth Valley Orienteers turned on the style to claim victory in the overnight Harvester Trophy relays for the fourth time in five years, and with it the overall British Relay League title.

The FVO team was never headed on the 50km, seven leg course, and romped home with a comforable 56 minute lead over 2nd placed South Yorkshire.

Last season's anchor man Jegor Kostylev came in as a late replacement for the injured Jon Cross, and, running in his first race for nine months, established a six minute gap on the opening leg over Robert Ashton (British Army), Andy Llewellyn' second leg effort of 33.22 broke the back of the race early on, as he extended the lead to over 20 minutes.

Marcus Pinker and Roger Goddard raced on into the night, and kept things safe in the dark,with leg times of 72.36 and 64.07,and Roger handed over a 46 minute lead to Pete Molloy as the sun came up over the South Downs. In his first-ever night race, Pete was able to concentrate on his race execution, and although the chasing pack was able to nibble at the FVO lead, there were no moves of consequence to worry the leaders.

Grace Molloy on leg 6 had another quick time (33.08) and such was the dominance that she was able to hand over to Will Hensman on anchor four minutes before 2nd place South Yorkshire had made their fifth change. It was a happy return for Will, who was racing on the area that he first started orienteering as a six year old, and although this was his first outing in the area since 1983, he was able to extend the lead to nearly an hour, coming back in 76.27 to post an aggregate team time of 5 hours 54 minutes and 3 seconds.

The Harvester win gave FVO the British Relay League men's title, with victories also recorded in the British Championships and British Mixed Sprint Relays. FVO was 2nd in the women's league, one point behind Edinburgh University.