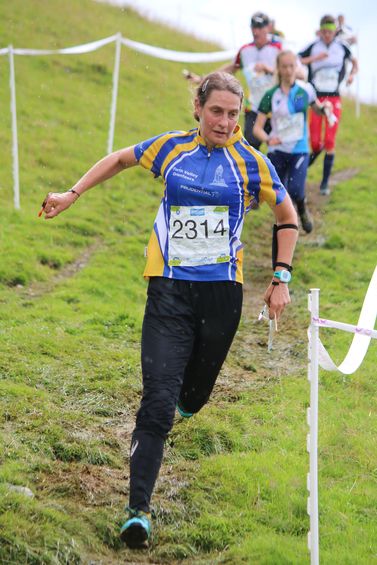 Forth Valley Orienteers sent a strong contingent of 19 athletes to the World Masters Championships in Denmark, and were rewarded with some strong displays right across the board.

The World Masters is undoubtedly one of the busiest events in the world orienteering calendar, as the stars of yesteryear meet up to do battle once again, and with this year's event being in the heart of Scandinavia, the birthplace of the sport, there was a larger than normal field of entries.

The final was held around Christiansborg Castle the following day, and as the best athletes cranked up the heat, the FVO team was more than holding its own. Having only just made the W55 final, with a 19th place from the heats, and 20 to qualify, Hazel Dean went off as little more than a stalking horse, but ran hard and clean to lead the field until the end of the day, claiming 7th place overall (14.13). Martin Dean backed up his fine qualification run with a top ten finish in the final - 9th overall in 15.22, and Ross McLennan was just outside the top ten in M40, finishing 11th in 16.19.

The action stayed at Tisvilde Hegn for the Middle final, albeit on a different part of the forest, and it proved a tough day for all concerned. Hazel Dean was the only FVO athlete to take a top 20 placing, as she finished 15th in W55A (35.09) although Brad Connor, having missed out on the M45A final by 12 seconds, secured second place in the 'B' final, coming home in 32.08 to not only get on the podium, but also secure a spot in the Long final, thanks to the system that promoted the top ten athletes from the Middle 'B' races, at the expense of the bottom ten from the 'A' final.

As well as the feature races for the Masters athletes, there was a parallel series of events for those too young to race in the championships, and Ruaridh Flint secured a fine series of results, with first place finishes on sprint 1 (18.12) and Middle 1 (41.17) and 2nd place in the Long race (39.17).