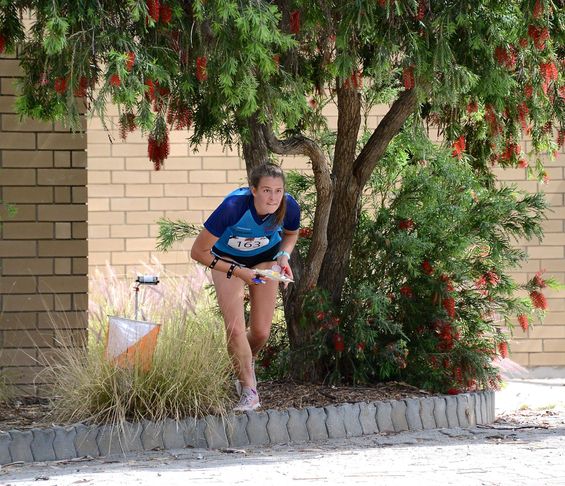 It was a fantastic first day of the JK for FVO, with seven athletes amongst the medals, and a host of personal best performances in the Sprint at Aldershot Garrison, Hampshire.

Grace Molloy won her 4th JK Sprint title, this time in W20E, in a time of 15.49, 14 seconds ahead of Thames Valley's Fiona Bunn, and more than a minute up on 3rd placed Laura King (EUOC). Signifcantly, this is the first time Grace has beaten Fiona at the JK, as her previous three wins have come in years when the English athlete has been in the age-class above.

Grace was joined on the top step by younger brother Peter, who was top dog in M18E. Peter was quick round his course, finishing in 16.08, ahead of David Bunn (TVOC) and Flurry Grierson (Devon), but then faced an anxious wait, as he was initially disqualified for a mid-course miss.

Only after a four hour wait, and extensive checking of his race card was it confirmed that he had in fact visited the control, and he was reinstated back into 1st place. Another FVO athlete was was “out” then “in”, then "out" again was Chris Smithard, who, like Peter, was disqualified for a mispunch, then reinstated into the silver medal berth in M21E, after recording the 2nd fastest time of the day (15.03), only to be disqualified (again) the following day after owning up to missing a control.

Jon Cross had his best-ever display in a JK Sprint, as he claimed the silver medal with a finishing time of 14.05. Jon held the class lead for much of the day, before EPOC's James Logue came in late to snatch away the victory. Jon was joined on the M50 podium by Ben Stansfield, who finished nine seconds behind, equalling his best-ever placing in the JK, which was recorded seven years ago.

Roger Goddard, too, had an excellent day at Aldershot, as he snapped up the silver medal in M45, in 14.50, for his 3rd JK sprint gong, and silver as well for James Hammond in M14, (16.25) as he added to his weighty trophy haul for the season. The final medal of the day went to Eilidh Connor, who was 2nd in Novice Juniors, behind a 12 year old Norwegian athlete, in a time of 18.50.

The first of the Forest stages takes place tomorrow, at Old Windmill Hill, Farnborough, with several FVO athletes making their 2019 JK debut, having elected to skip the sprint stage to concentrate on the forest discipline.