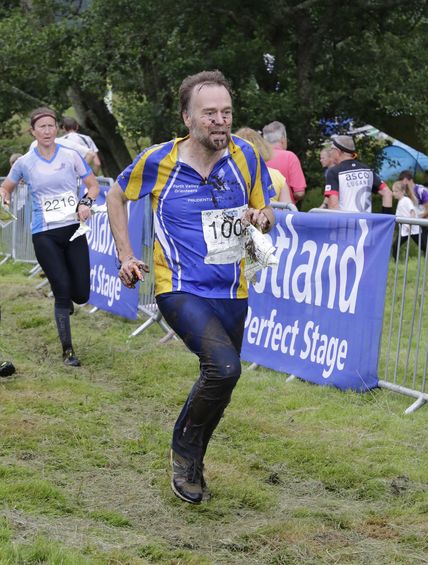 Strathearn 2019 was a fantastic addition to the long and glorious history of the Scottish 6 Days Orienteering Festival, and no fewer than 14 FVO athletes were on the podium at the end of the competition.

Chris Smithard is the new M21E champion, joining a star-studded cast of top athletes who have won the crown. Unlike the other 6 Days divisions, the elite title is determined by the results from all of the rounds, and Chris finished the week 1 minute 50 seconds ahead of 2nd placed Nathan Lawson, helped in no small measure by a five minute winning margin in the race at Culteuchar & Dron. Graham Gristwood was in early contention for the title, but, mindful of his preparations for the imminent World Championships in Norway, elected to run in only four of the six rounds, winning three of them.

Will Hensman had the M40 title wrapped up by Thursday evening, with four wins from four starts, which was fortunate as his week ended prematurely with a serious injury sustained on the run-in on the 5th day.

Andy Llewellyn, too, had his M21L title secured after four rounds, and was able to head off to his country estate for the weekend. Meanwhile, Martin Dean shows no signs of slowing up. 42 years ago, Dixie was on the M19 podium, and this year he was top of the tree in M60, tying on points with Sweden's Stefan Karlsson, but taking the title by virtue of a better "5th" score.

James Hammond enjoyed a ding-dong battle with the best of the English juniors, and won through in M14, taking the title with a fine victory on the final day. Kirsty Bryan-Jones showed no ill-effects from not having orienteered in 15 months prior to the Festival, with three wins from her five outings, and was a worthy champion in W45.

The M45 classes were an FVO showcase, with two notable head-to-head battles. Dave Godfree was 2nd in M45A, behind former FVO man Nick Barrable, as the pair snapped up all six races between them, and Roger Goddard was 3rd, just holding off a late challenge from Jason Inman. In M45B, Fraser Purves and Brad Connor each won one of the stages, but ultimately it was Fraser's 2nd place in the final race that won him the silver medal, one point ahead of Brad, who was 3rd in both the final stage and the overall standings.

Gareth Bryan-Jones was 2nd in M75, tied on points with Mike Pearson (WCOC), but losing out on the gold medal on points countback. Doug Wood's four podium places in M70B, including a win at Auchingarrich, helped him to the silver medal.

Grace Molloy was never outside the top two in her five races, having skipped the first stage, along with many of the other leading British juniors, and took stage wins at Dundurn and Craig a Barns, but missed out on the W20 gold medal by 25 seconds in the last race of the programme, as EUOC's Laura King pushed her into 2nd place, in both the stage and the overall standings.

Lizzie Stansfield also won her race at Dundurn, and, coupled with 3rd place finishes at Craig a Barns and Culteuchar, was well placed to take the W18 bronze medal. Eilidh Connor was to the fore in W10B, completing the race series unaided, and, thanks to an excellent end to the week, with a trio of 2nd places, claimed a share of the bronze medal.

Finally, Vicky Thornton was always well up the leaderboard in W55, and a win at Culteuchar and a 2nd place finish in the last race at Grandtully brought her the overall bronze medal.

The middle Wednesday of the Scottish Six Days is billed as a "Rest" day, for recharging the batteries after three tough days in the forest. But for a large contingent of the FVO posse, Wednesday means its "Sprint" day instead, and with the much awaited Summer Sprint Spectacular Series due to launch this week, it was a chance to get both legs and brain working in rapid tandem.

Ten of FVO's finest snagged top 10 finishes, and the associated BTO Solicitors Scottish Orienteering Urban League points, with three athletes getting onto the podium in their individual class.

Will Hensman stormed home in Veteran Mens in 17.19, to claim a notable 5th win of the week.. Grace Molloy is rapidly morphing into a bit of a 'Sprint Beast', adding the Six Days Sprint crown (17.30) to the O-Ringen title she won last week, although without the 17,000 spectators who lined the course in Sweden. The third podium slot of the day went to James Hammond, who was 3rd in Junior Men (11.45), despite giving away three years age difference to the other leading competitors.