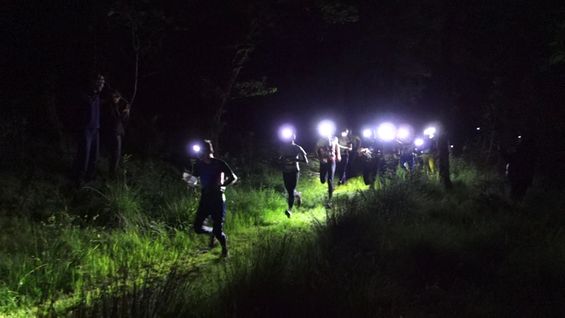 The dust is finally settling on the 2018/19 FVO Night Series after the final race at South Achray and what a series it has been.

Graham Gristwood reclaimed his King of the Night crown after two fallow years, scoring a maximum 500 points in the series, with only a 45 second drop on round 3 at Polmaise spoiling an otherwise-perfect scorecard. Defending champ Lewis Taylor didn't surrender easily however, and was right up there throughout the winter, with two race wins and four 2nd places giving him second place overall, and 3rd spot fell to Chris Smithard, who was still in with a mathematical chance of the title until the dying weeks of the campaign.

There was no such drama in the quest to be Queen of Winter, as Fanni Gyurkó had the title wrapped up by January, at Falkirk Wheel, for her 4th Night title in five years. Grace Molloy was seccnd, with Angela Mudge third, although both only competed in the last race.

If the Long series was a sprint, then the Short series was very much a marathon effort. There were eight different race winners, with only Laura Hindle taking more than a single stage. 11 people took a maximum 100 points from a race, thanks to the ranklng system that acknowledges runs which are very close to the winning time. 42 different athletes scored points in the series, which must be a new record.

Mark Wood (ESOC) won the final race at South Achray, but is ineligible for honours, as he's not a club member, so the newly-crowned Prince of Darkness is Mark Holliday, who got his hands on the short course title eight years after his first win in the event.

Laura Hindle could have scooped the lot with a win in the last race, but had to settle for 3rd place overall, and the title of Twilight Princess, as she became only the 4th non-Longhurst to win the short course title in its 12 year history.

Results from the South Achray race, and final league tables are online here