Red Roses and "the Bluid-Red Wine" 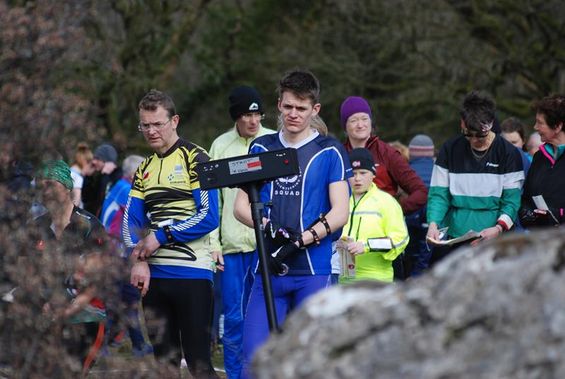 A large FVO contingent was in the Lake District, for the Spring Weekend, with events organised by Lakeland Orienteers and South Ribble, and there was success on all fronts. Perhaps the most important of these were the GB junior selection races for the European Youth Championships in Belarus and the Junior World Championships in Denmark, and the FVO youngsters were well up there in their bids for selection.

Pete Molloy missed the sprint selection race at Lancaster due to other commitments, but bounced back in style to win the middle distance race at Ribbledale in 24.56. In an error-free run, Pete was never outside the top two places throughout, taking the lead with six to go and running on for the victory.

At the Cumbrian Gallopen, Jason Inman was 3rd overall on the Brown course, finishing in 37.18, and trailing only local legend Steve Birkinshaw and GB star Megan Carter-Davis. Janine Inman got better and better as her Blue course run developed, and ended up 5th, and 2nd woman, with a finishing time of 38.07

Hannah Inman, meanwhile, took a big step up in class to win the Yellow course in 17.05, and James Hammond secured the top place in Light Green (29.34), despite a costly error two from home. The final podium place of the day went to Rebecca Hammond on the Orange course, as her time of 32.34 included four "fastest leg" splits, including the run-in.

Closer to home, there were two events in Fife, as Masterplan Adventure staged a Sprint race in Culross, Fife, which was planned by Jon Cross, and the following day, there was the KFO Urban race in Dunfermline.

Graham Gristwood had a 14 1/2 minute winning margin at Dunfermline to take victory in the Open Mens division (35.48) and Laura Hindle was a narrow 2nd in Open Women (46.46). There were FVO 1-2's in both Veteran classes, as Jon Cross put away his organiser's clipboard and returned to action scoring a super-narrow seven second victory (38.31) over Chad Harrison (38.38). In the Veteran Womens division, Cathy Tilbrook had the win (43.10) with Beccy Osborn 2nd (44.29).