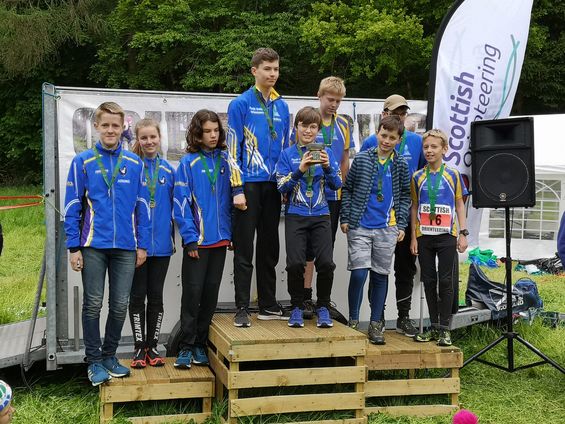 There were a magnificent seven medals for the FVO teams at the Scottish Relays in Dumfries-shire, to round off a splendid championship weekend.

FVO Flyers, with Andy Llewellyn, Peter Molloy and Kris Jones (in his 2019 debut) were 2nd by 90 seconds in the Mens Open race, but won the British Relay League title by four points from EUOC Legends.

FVO Female Flyers (Grace Molloy, Janine Inman and Lizzie Stansfield) took the Bronze medal in the Womens Open competition, and with it, secured another second place in the British Relay League.

The +8 Handicap race saw a head to head at the top of the field between two FVO teams, with Ben Stansfield pipping Jon Cross by four seconds in the finish tunnel to take the gold medal for his team, which included Will Hensman and Ross McLennan, from the nominal FVO 4th team of Steve Feltbower and Roger Goddard.

There was a silver medal in the +20 race for Beccy Osborn, debutante Vicky Thornton and Rona Molloy, as the team remained in Gold medal contention until late in the final leg.

And a 1-2 in the Under 44 class, with Jamie Goddard, Jamie Connor and Pierre Lardet just ahead of James Hammond, Sam Hunt and Stan Flint.