FVO is Up for the Cup 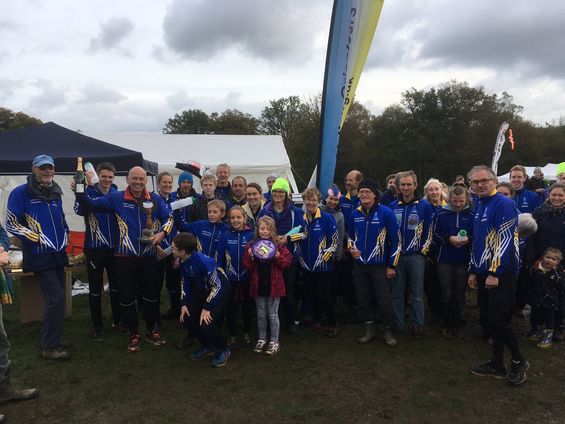 FVO turned in a fantastic team performance to win the Compass Sport Cup for the third time in five years, at Pippingford Park, East Sussex.

The Compass Sport competitions, Britain's premier club-based event, have long been a happy hunting ground for FVO, with twelve wins in the "Small Clubs" trophy making them the most successful outfit at that level. However, after cup wins in 2015 and 2016, a pair of 2nd place finishes led some to believe that the rich vein of form was coming to an end.

Despite being without the services of several potential points scorers for the final in south-east England, FVO skipper Jon Cross assembled a 40-strong party to take on the might of England's best clubs, and was quietly confident that a successful return was on the cards.

Local powerhouse Southdowns came in mob-handed, with nearly 100 entrants, and led the standings in the early returns, while defending champions South Yorkshire and 2017 winners Bristol OK were also in with a strong shout, but with the FVO team back-loaded with talent, it became clear as the day developed that the cup would be returning to the Forth Valley once again.

The club's juniors led the way, with victories for James Hammond (Orange Boys - 19.09) and Lizzie Stansfield (Light Green Girls - 24.49) and a 2nd place finish for Pete Molloy (Short Green Boys - 31.35) racking up early points for the team cause. They were joined on the top step by another junior, Grace Molloy, who was eligible to run in the Green Womens division, and won the race by an impressive 7 1/2 minutes (29.21).

The Open age teams at the sharp end of the competition played a significant role, with all eight of the top athletes in the class contributing to the team total. Graham Gristwood, back in the area where he learned the sport, won the Mens Open race in 49.51. ahead of team-mate Mark Nixon, who was 2nd (54.15). Andy Llewellyn secured 11th place (65.29) and Jegor Kostylev notched valuable points after a run of 71.26, for 15th place overall.

The club's strength in the veteran divisions told true, as the Short Brown Men Vets (aged 40 to 50) placed four athletes in scoring positions, led by Dave Godfree (3rd in 52.22). and he was joined on the scoreboard by Roger Goddard (5th in 56.05), Marcus Pinker (6th in 59.00) and Ross McLennan (15th in 69.08). Paul Hammond equalled the 18th place of Laura Hendrie, returning in 70.11, but with Laura's run already counted, Paul's was discarded from the points chase.

The Womens Vets also scored highly, with Beccy Osborn 3rd in 38.00, Rona Molloy 8th in 42.51 and Cathy Tilbrook 11th in 44.45 notching up 381 points, 32 more than the rest of the competition at that level to establish a lead that was never headed.

The one perceived weakness in the FVO lineup is in the SuperVet and UltraVet categories, for athletes aged 60+, and the absence of some key figures at this level placed an extra burden on those who were chasing the late points. The trio of Gareth Bryan-Jones (7th in 45.29), Dave Coustick (11th in 47.40) and Geoffrey Hensman (13th in 49.40) delivered when the chips were down, racking up a healthy 269 event points to outgun Southdowns by five points on average and finally end their challenge.

The big race experience was shared by all, with many of those who didn't make it onto the scoreboard nevertheless running beyond their expected ranking position to deny points to the other leading contenders.