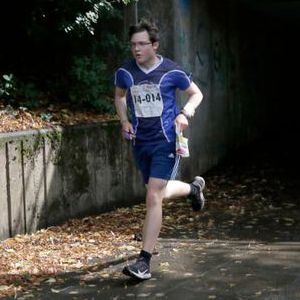 FVO athletes were amongst the medals at the British Sprint Championships in Skelmersdale, Lancashire, as team orienteering competition returned for the first time in 18 months.

The opening day saw the Mixed Sprint Relay, where Forth Valley has enjoyed success in the past, and this year was no different. It's widely regarded that FVO has one of the strongest Veteran squads in the country, and they showed their form by collecting the gold medal in the V40+ class, in a time of 43.58.

Roger Goddard brought the team in 2nd on the opening leg, seven seconds behind MDOC (14.56). Beccy Osborn kept the team in contention (14.52), handing over to Will Hensman in bronze medal position, and Will then turned on the jets, posting the quickest time on the anchor leg (14.10) to take the win by 90 seconds from SYO.

Fe, howwever, would have bet on the Under 16 team of Jamie Connor, Lucy Hensman and James Hammond getting amongst the medals after two legs, as they sat nearly ten minutes off the race pace. However, James produced a quite stunning run on the anchor leg, chopping more than three minutes off the lead, and coming home for the bronze medal in 13.27, 24 seconds ahead of 4th placed TVOC.

After two wins and a 2nd in the last three championships, there was no four-in-a-row for the elite team of Heather Fellbaum, Peter Molloy, Chris Smithard and Vicky Thornton. They were well placed going into the final leg, as Chris handed over in silver medal position, but a straight-through leg caught Vikcy out, and the team was eliminated, as almost half the field fell at the same hurdle.

The following day was the individual championship, and there were more medals to be won. Peter Molloy was champion in M20E (15.02) on his first go at the championship distance, while James Hammond added the M16A crown (14.58) to his earlier successes in younger age-classes.