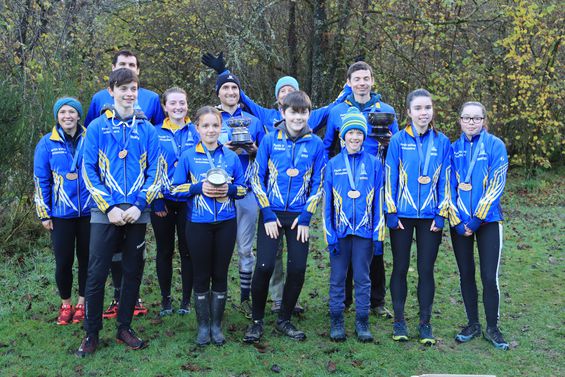 Forth Valley Orienteers played host to the National Relay Championships, and came away with two championship titles after an exciting day of racing at Doon Hill, Aberfoyle.

While the relay events are normally on the closing day of Champions Weekend, COVID regulations earlier in the year meant that no mass start races could be held, and it looked as though the relay trophies wouldn't be contested, for the first time since the Foot and Mouth epidemic in 2001. However, FVO president Jon Cross made a successful bid to British Orienteering to stage the races late in the year, and more than 50 teams lined up, with both the British and Scottish titles up for grabs.

The first medal of the day went to the FVO U44 juniors, as Esme Kelly and Rebecca Hammond stayed tight to the front of the race, and Sam Hunt lopped 84 seconds off the lead of INVOC to return in 55.13 for the win. In the U36 race, Scarlett Kelly was handed an eight minute deficit to overcome on the last leg, and took 5 1/2 minutes off the INVOC lead early in her round. The differential proved too hard to claw back however, and the FVO youngsters, who also featured Hannah and Matthew Inman, had to settle for the silver medal on this occasion.

FVO was able to call upon an experienced team for the Mens Open race, with all three runners having won the title on previous occasions, and Chris Smithard posted the quickest time of the day (34.10) to establish an early lead. Graham Gristwood came in just two seconds behind on the second leg as the lead over Edinburgh University was extended, and Alasdair McLeod cemented the win with a 34.14 time on the closer, as the FVO men led from start to finish.

The Womens Open race appeared to be all about Edinburgh University, who were able to call upon the services of most of the current GB junior squad across their three teams , but Bryony McLeod upset the odds by returning 2nd on the opening leg (38.15). Edinburgh soon restored their advantage, but there was late drama, as the EUOC 3rd team mispunched on the last control to be disqualified and hand the bronze medal to FVO's team of Bryony McLeod, Vicky Thornton and Laura Hindle.

Off the podium, there were 4th place finishes in Men’s Open, as James Hammond broke Grace Molloy's club record as the youngest competitor in an Open Relay team at 15, linking up with veterans Steve Feltbower and Will Hensman, U44 through Alexander Hunt, Andrew Twigg and Jamie Connor and ad-hoc, as Marie Claire Shankland, Dave Coustick and Brian Bullen were just 2 1/2 minutes off an unexpected podium, in a race that was won by the EUOC freshers team.