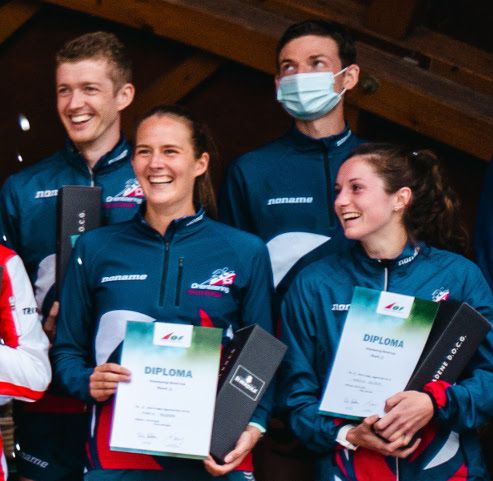 Forth Valley Orienteers' Grace Molloy and Chris Smithard made up half the Great Britain team for the World Cup final in Italy as GB posted its best World Cup team performance in 13 years.

The Mixed Sprint Relay in Cortina was the closing event of the 2021 World Cup, with Great Britain languishing in 18th place in the overall standings, having missed out on the first round of fixtures due to COVID protocols.

Grace, making her first-ever appearance in an international Mixed Sprint Relay, was immediately involved in the leading group, and was 3rd, nine seconds off the race lead, at the 7th control point. Good race execution in the technical section around the market area kept her in contention, although a fast-finishing Russian athlete overtook her at the changeover, as she handed over to Chris in 5th place.

Chris, who had been struggling this week with a strained achilles, maintained the GB challenge at the head of the race, with a strong run, but tied up in the closing straight as the chasing pack caught him up,handing over in 8th position.

Ralph Street (South London) chased hard on the 3rd leg, and soon had GB back into contention, as he posted the second quickest time of the race, and handed over to Megan Carter-Davies (Swansea Bay) in an unexpected bronze medal position.

The bronze medal was still very much on the cards midway through the final lap, but a more favourable gaffle on the 8th leg saw defending champions Sweden slip through. Megan stayed in the hunt though, and was within touching distance of the bronze medal on the run-in to the finish. A slip on the wet cobbles allowed Switzerland's Simona Aebersold to overtake in the finish tunnel, and Great Brtitain ended up 4th, five seconds off Bronze.

This was GB's best relay performance since 2008, when the mens team won gold at the World Championships, and the result, coupled with some strong performance in the individual races in Italy, moved them up to 13th in the ranking table, one place higher than in 2019.