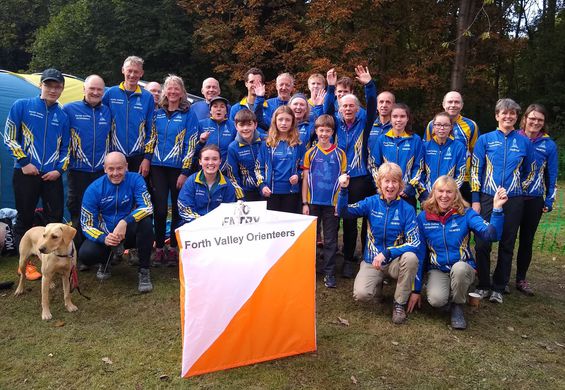 An epic battle in the final of Britain's premier club competition saw Forth Valley Orienteers come up just short in their bid to retain the trophy, despite recording the second highest points total in the 38 year history of the event.

Access restrictions meant that the staging of the 2021 Compass Sport Cup final, which brought together 12 of the UK's finest club teams, was in jeopardy right up until the last minute. Both Coventry-based Octavian Droobers and Derwent Valley, from Derbyshire, had to relinquish their rights to stage the final. as they were unable to get permission from landowners. Finally two weeks before the scheduled date, South Yorkshire, the most successful club in the history of the competition, with 13 wins, were able to gain access to Tankersley Wood in Sheffield, and the race was on.

FVO sent a strong team of 60 athletes south to Yorkshire, but with SYO able to field a team of 120, it was going to be tough to score points across the board. The SYO youth programme is the best in the country, and they dominated all four junior races, taking maximum points to establish an early lead that was never really threatened.

Just off the podium were Graham Gristwood (Brown men), Grace Molloy (Blue women), Kirsty Bryan-Jones (Green women) and Jamie Connor (Orange junior boys), as FVO notched up 2377 points, which would have been good enough to have won the competition in any other year. However, SYO's eight class wins saw them finish on a record total of 2397, with West Cumbria some way back on 2245.

There was some silverware for FVO though, as Jamie Goddard added the Compass Sport Golden Boot to his FVO Golden Gutty from earlier in the summer, winning the run-in competition after an exciting run-off against Stephen Elkington (Octavian Droobers), after the pair couldn't be separated on the course.