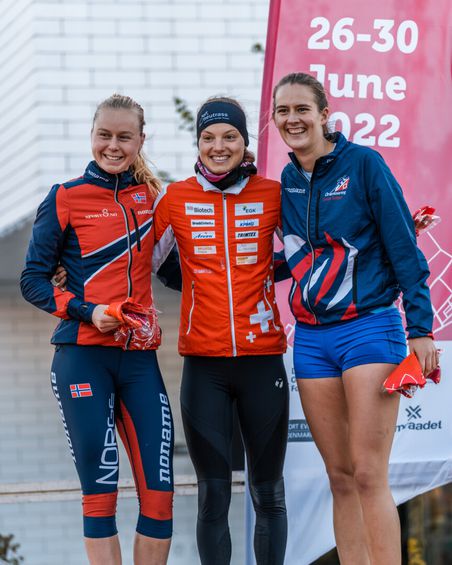 Grace on a senior podium for the first time

Forth Valley Orienteers international stars were in scintillating form as they produced a set of stunning results at a world ranking competition in Denmark. The 2022 World Championships is the first where the sprint and forest disciplines are separated, and more than 200 of the world's top athletes congregated in Kolding for a test event, with major ranking points up for grabs.

Grace Molloy stunned the field in the innovative knockout sprint event, where athletes race head to head, rather than against the clock, and only the best progress. She did the needful in the qualifying race, progressing in 6th place (12.43) from her heat, but then stepped up the level to win both quarter final (7.52) and semi final (6.57) races, and take her place alongside the world's elite in the final race.

Going out hard, she opened up a gap on world champion Simone Aebersold (Switzerland) which she held to within sight of the finish. At the final control, Aebersold headed right, Grace headed left, and the Swiss athlete was able to get her nose in front for the first time as Norway's Victoria Haestadt came out of nowhere to push Grace down into bronze medal position (6.52), four seconds off the win.

Grace also took part in the individual sprint, qualifying in 4th place for the final, before back to back mistakes early in the final saw her drop down to 18th (16.39).

Kris Jones was back in the groove for the first time in 18 months, having taken a sabbatical to concentrate on athletics, and showed that he still has the necessary pedigree to contend at the very top of the world game, by making the podium in the individual sprint event.

The lack of activity saw Kris's world ranking plummet in 2021, but he raced like he had never been away, and led the field at the first checkpoint by a remarkable 36 seconds. Pushing hard for an unlikely win, two minor errors where he overshot alleyways allowed the competition to close up, and as he tired in the final stages, he slipped back to 6th (15.13), 20 seconds off the lead.

Team-mate Chris Smithard was also in fine form at the end of an injury-ravaged season, running on from mid-course to notch an 8th place finish (15.21) , his best in four years, In the knockout event, Chris won his qualification race in 10.10, scalping amongst others the world number one, Yannick Michiels (Belgium) and took his place in the quarter final. The quarter final race saw Chris at the head of the pack, and he returned in 2nd place (6.50) to progress. In the semi-final, he continued his fine showing, by winning the race in 6.26, to take his place in the final, where he was 5th (6.10). 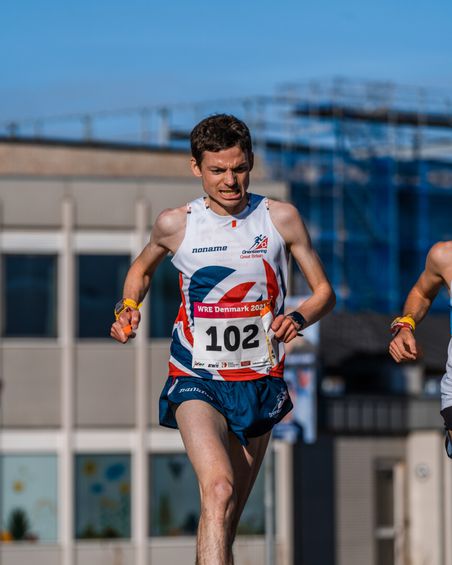 Chris in action in Denmark 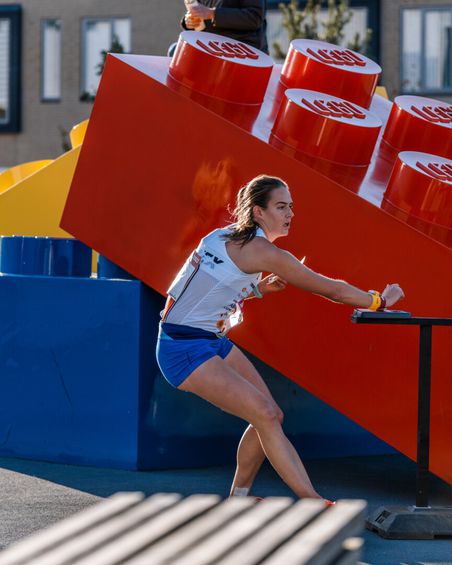 Grace in action in Denmark