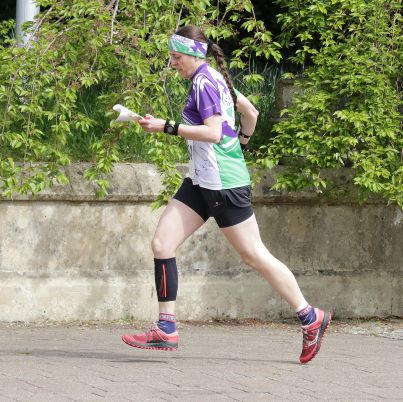 The FVO posse got its 2022 JK campaign off to the best of starts, as six of our contingent won medals on the opening day's Sprint at Swansea University.

Rachel Kirkland won her first JK title, at the 7th time of asking, claiming the W50 crown in 17.00 to add to her 2021 British Sprint trophy. The victory was never really in doubt, as Rachel posted the quickest split on 13 of the 18 legs, with no errors on the remaining five.

Eilidh Connor made her JK debut, having run colour-coded classes in past years, and picked up the W12 trophy in 19.38, ahead of Interlopers' Lucy Ward, a battle that is set to run for years.

James Hammond was set a quick time to answer by an early-starting Finnish athlete, and proved he was the man for the task, recording a time of 13.58 to win M16 by nearly two minutes.

Peter Molloy led M20 until the final finisher, but was pushed off the top spot by Devon's Flurry Grierson, a time of 15.37 proving to be 12 seconds off the pace, but still good for the silver medal.

Will Hensman lifted his 4th JK sprint medal, bronze this time in 14.47, and Scarlett Kelly, on her big race debut, joined him on the podium, coming home in 21.10.