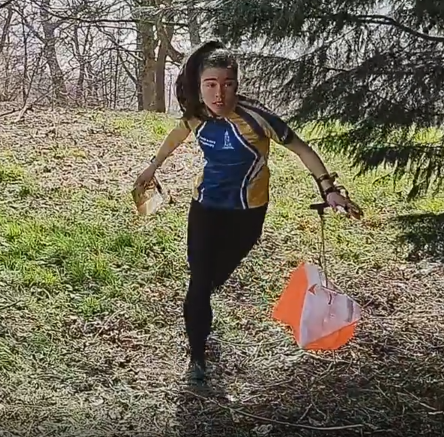 FVO youngster Scarlett Kelly was in sensational form on day two of the 2022 Jan Kjellstrom Festival of Orienteering, as she won her first major title in the W14 Middle distance race.

Unlike many of her contemporaries, Scarlett doesn't come from an orienteering family, and lacks the years of String-White-Yellow courses that add experience of big events, but that mattered not a whit, as she took the lead on the third leg, and ran on for a time of 24.43 to win the title by 63 seconds.

The victory was one of seven for FVO athletes on the first of the terrain-based days of the festival, as the competition took to the slopes above Brymmawr in the Brecon Beacons.

James Hammond is proving tough to beat, winning his 5th straight trials race of the spring, this time in 26.18 in the M16 class, and he's one of just four male athletes still in contention to be Festival MVP.

Peter Molloy topped M20E in 20.18, and must now have at least one foot on the plane to JWOC, while Andy Llewellyn won his first-ever daytime Gold medal in M35L, coming home in 34.33.

In the Short course races, there were wins for Lucy Hensman (W18L), Ben Polwart (M20S) and Grace Polwart (W14B).

Grace Molloy shrugged off yesterday's disappointment of a mispunch from silver medal position to get her hands on the Middle distance Silver, two minutes behind pre-race favourite Megan Carter-Davies, and there was Silver too for Vicky Thornton (W60L - 30.45) and Hannah Inman (W10A - 17.10), in Hannah's case by a mere nine seconds, while Will Hensman got on a JK Middle podium for the first time in six years as he took Bronze in M40 (38.02).

Jason Inman was 6th in M50, and there were 9th place finishes for both Simon Hunt (M55S) and Helen Pybus (W21S), while Brad Connor hirpled round the M50S course for 10th place.

The successes even extended to the social courses, as FVO blocked out the top three in the Light Green course (which mainly consisted of athletes who had missed the event cutoff), through Jonno Pybus, Ben Parkinson (in his first race in five years) and Heather Thomson.