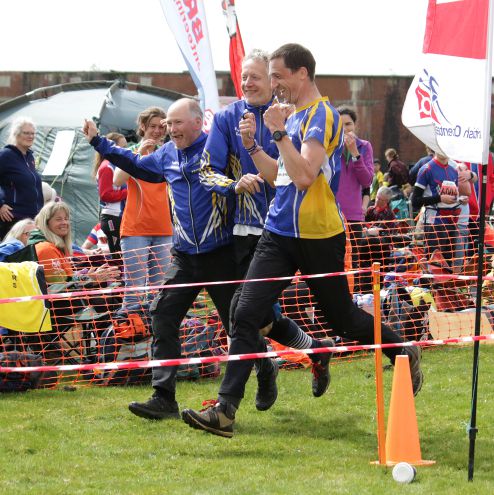 Forth Valley Orienteers' veteran mens team had a dramatic come-from-behind victory at the 2022 JK International Festival relays, as the club scooped five medals on the closing day of competition.

The team was wracked with injury problems pre-race, with all three runners reporting fit only in the days leading up to the race. Roger Goddard went out steadily, and was 2 1/2 minutes off the pace at the handover, but handily placed in 5th position.

Jason Inman sped on in the middle leg, and had the gap down to just over a minute as he handed over to Will Hensman in 2nd position. The gap to leaders SYO remained constant, and when Will returned to the spectator area for the final 800m loop, they were resigned to the silver medal.

However SYO's anchor man Andrew Preston made a serious error with three to go, allowing Will to get to the front for the first time, as he returned to jubilant scenes from the FVO contingent, in a composite time of 117.43 for the win.

The win was one of three for FVO, as Heather Fellbaum opened for the SuperVet Women strongly, and brought the team back from the 1st leg four seconds behind Airienteers. Vicky Thornton went off on the 2nd leg like a greyhound, and came back to hand over to Rona Molloy with an impressive 3 1/2 minute margin. And Rona ran on, with the quickest split on the closer, to gain a further 3 1/2 minutes and take the win for the team in 94.27.

The Junior mens relay saw the FVO team in a strong position throughout. Sam Hunt was unlucky to come in 4th on the opening leg, but just 20 seconds off the race lead in a block finish. Jamie Connor gained ground on the shorter middle leg, and touched home just seven seconds behind race leaders SYO. But with festival MVP James Hammond on the anchor, anything is possible, and James ran away with the victory, taking nearly six minutes out of the SYO lead to trot home in 64.31.

The first success of the day for FVO came in the Junior Relay, as Rebecca Hammond kept tight to the leading pack to change over 1.44 off the lead. Eilidh Connor brought the team right back into contention with the 2nd fastest split of the day, to hand over to Matthew Inman just ten seconds back. Matthew was chased down hard, and had to work hard to keep off a strong challenge from Southern Navigators, but held firm when it mattered, and came back in 50.23 for the silver medal.

FVO Flyers tasted defeat for the first time in three years in the Mens Elite relay. Peter Molloy battled hard on the opening leg of a star-studded relay, but a navigational mistake early in his run put the team two minutes down, and despite Chris Smithard posting the quickest time on the middle leg, there was too much for even Graham Gristwood to make up, as the team came in 2nd, 1.40 behind Octavian Droobers, who led from gun to tape.