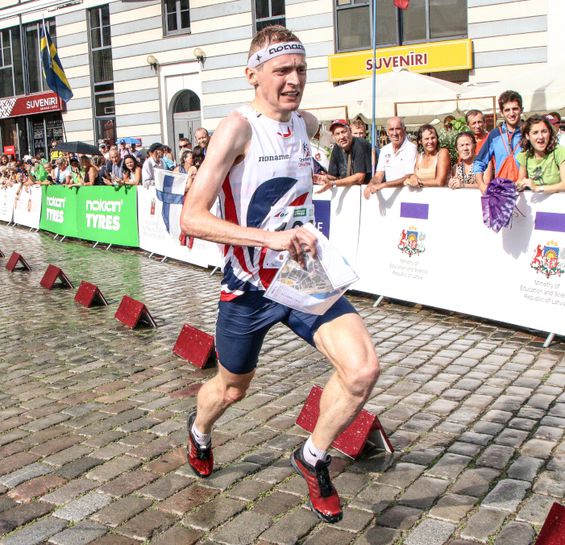 Forth Valley orienteering star Kris Jones helped Great Britain to its first medal in nine years as the Mixed Sprint Relay team claimed silver at the World Championships in Denmark.

Jones was back in the team after two years away, pursuing a track career which saw him achieve the qualifying time for the Wales Commonwealth Games team in the 5000m and 10,000m, only for Welsh Athletics not to select him, and came back with something to prove.

The race went perfectly for GB, as first Charlotte Ward (HALO), and then Ralph Street (South London) navigated confidently to keep the team at the head of the race, and Kris, on the 3rd leg, sent out Megan Carter-Davies (SBOC) with a one second lead over defending champions Sweden.

Multiple World Champion Tove Alexandersson soon had the lead back for the Swedes, and ran on for the win, but Megan held strong throughout her leg to repel the challenge of Norway and secure the silver medal for the team in a composite time of 59:41.

Kris went into the individual disciplines with high hopes of more success, but was left frustrated after mistakes at crucial times. In the knockout sprint, a new discipline for 2022, he made the six man final, and led through the 2nd control, but then overshot an alleyway to allow the chasing pack to get past. Working hard to get back in touch, he caught up on the run for home, before another sub-optimal route choice on the run-in left him 6th overall (7.00).

The individual sprint closed out the championships, and Kris was quickest through qualifying (13.00) to take the top slot in the final as last starter. Once again he raced quickly, and came home in 14.00, for what would have been the bronze medal.

However, on going to download, it quickly became apparent that he had no registered time for the 12th leg, and he was disqualified. Kris said “This is pretty hard to take, and I'm quite raw about this. I certainly have the speed in me to contend, but I need to have a look at my punching technique before next season”.

FVO team-mate Grace Molloy was named in the womens squad for the knockout sprint, and made it through to the quarter-final, where she was eliminated by 10 seconds by surprise package Eef van Dongen (Netherlands), who went on to claim her country's first-ever WOC medal, a bronze, in the final.