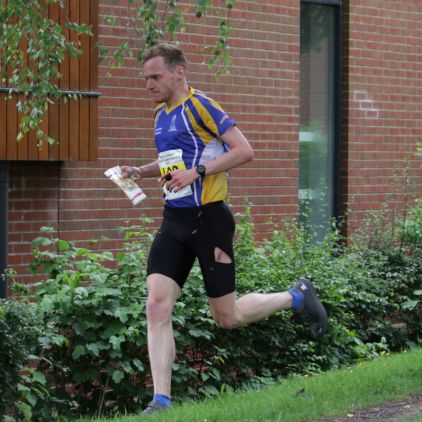 The 2022 championship season came to a successful conclusion, with FVO athletes winning nine medals, three of them gold, at the British Sprint Championships in Leeds.

The M21 Open class had a number of guest athletes from New Zealand and Australia, which greatly enhanced the quality of the field, but the real focus of attention was the battle between Kris Jones and Chris Smithard to see which of them would be crowned British champion.

Both have topped the podium before, but it was Kris who emerged victorious this time, in 16.07, 17 seconds behind the ineligible Kiwi Tim Robertson, but 1.21 ahead of Chris, who was 5th past the post, but took the silver medal after the exclusion of the guest athletes.

Peter Molloy dealt with confusion in his qualification round, as he turned up for his start to find there were no maps left, but showed his dominance of the class this year, to post a winning time of 17.56 for a 2 1/2 minute margin over Jim Bailey (BOK), for his fifth individual championship win of 2022 from six starts.

There's class dominance, and then there's James Hammond. 11 championship races, 11 championship wins, and he added the sprint crown to all the rest of the metalware, coming home in 19.18.

There were silver medals for both Rachel Kirkland (W50 - 19.40) and Heather Fellbaum (W55 - 19.09) as they returned to an environment that they know so well, and have had so much success in.

Off the podiums, Trevor Hoey and Mark Wood set new championship PBs, while Esme Kelly, who was unfortunate to be balloted out of the W14 final was 2nd in the B race.

Over the course of the season, FVO athletes have won nearly 20% of the championship races they have competed for, with more than 40% of runs ending on the podium.