FVO to the Four at British Champs 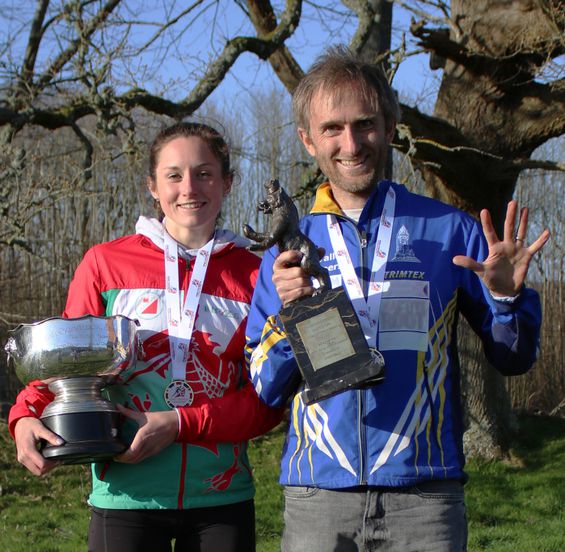 FVO athletes made a significant mark at the 2022 British Championships, as they captured four individual titles, followed up by three team relay crowns.

Graham Gristwood established himself as the most successful male athlete in the history of the event by winning his fifth M21E title, as he raced faultlessly to post a seven minute winning margin over MDOC's Peter Taylor-Bray (102.42). Chris Smithard was in medal contention for much of the race, but ended up 12 seconds off the podium (110.08).

In winning the title, Graham also becomes the oldest-ever national champion, beating the record set in 1968 by former Olympian Gordon Pirie. He still has some way to go though to overtake Yvette Baker's seven titles from the 1990s, but shows no signs of moving into the age-class competitions yet.

Graham was joined in the winners enclosure by Peter Molloy, who defended his M20E crown in 66.03 following a head-to-head with EUOC's Matthew Gooch, James Hammond, who cut the turf in the M16A class, and smashed out a 54.18 performance, that no-one could match, and Hannah Inman, on her championship debut, who won W10A in 28.52, 35 years after her mother won the same title.

There were silver medals for Andy Llewellyn (M35A), his first since he was a junior and Vicky Thornton (W60A) and bronze to Roger Goddard (M45A), Will Hensman (M40A), Eilidh Connor (W12A, again on debut) and Lucy Hensman (W18L).

The fine form continued into the British Relay Championships the following day, with three titles heading back to Scotland. FVO won a truncated version of the championship in 2021, with no English teams on show due to COVID, but this year there was a full field of competitors.

Peter Molloy opened the show in the Mens Elite class, and kept it tight on the first leg, coming in two minutes behind SBOC's Ben Mitchell.. Chris Smithard took over, and, with the help of the quickest leg split moved the team through to silver medal position, just seven seconds down on EUOC, and Gristwood turned on the afterburners to claw five minutes out of Matthew Gooch, and turn silver into gold.

The Veteran men had a straightforward win despite injury concerns over their team. Steve Feltbower went out quick, Roger Goddard was quick in the middle, and Will Hensman finished quickest of all, each leg executed in the fastest time, and an 8 1/2 minute winning margin over SYO.

FVO was defending the M18 title which wasn't competed for in the last two years, and was still able to call upon the services of two of the 2019 team. It was a similar story to the Vets, as Jamie Goddard posted the quickest time on the opening leg, cemented by another quick leg from new boy Sam Hunt, and James Hammond logged the quickest time of the day on the anchor to finish nine minutes ahead of SYO.

The victories over the two days represented over half of the medals won by Scottish-based athletes, as Scotland placed second in the regional medal table behind Yorkshire & Humberside.