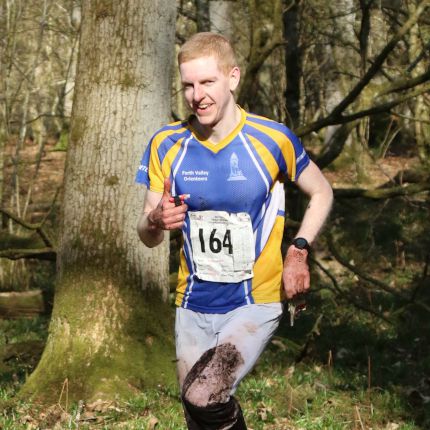 The Scottish Championships on Royal Deeside proved a fertile field for FVO athletes, as our contingent picked up 21 medals, including no fewer than eight national championships following the racing at Glen Dye.

Alasdair McLeod is the overall M21E champ at last, as he came home in 100.13 for a three minute margin over defending champion Alastair Thomas (EUOC). Spongey was the leading Scot seven years ago, when he came up against Swiss superstar Daniel Hubmann, but led all competitors this time around.

The eighth champion was something of a surprise, as Mark Wood, whose previous championship best was 2nd place on a B course ten years ago, stayed strong throughout the early phases of his M50 Long course, and pounced at #17 when race leader Jason Inman dropped 80 seconds to surrender the lead, and Mark ran on for his first-ever championship win in terrain. Both Lucy Hensman (W18L - 83.13) and Holly Stodgell (W20S - 55.36) headed their non-championship classes.

Off the podiums, there were a host of championship PB's for eleven different athletes, including both Ted Finch and Geoffrey Hensman in M70.