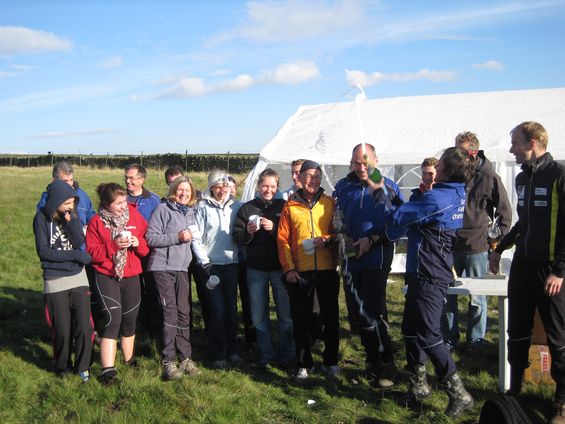 Great news from sunny Burbage Moor in the Peak District where the Compass Sport Trophy Final was held yesterday. FVO retained the trophy and are national champions once again!

Rough tough heathery moorland and technical rock detail were the order of the day, and led to some very tired looking people in the finish field! FVO runners coped best with the terrain and navigational challenge to secure a narrow victory in the face of strong challenges from East Pennine and Edinburgh Interlopers. The Trophy may be the 'small clubs' competition but three of the clubs in the final had sent over 40 runners. Thus a fantastic effort by our relatively small group of 23 runners to secure a full set of 13 counting scores with sufficient points to take the overall victory.

There were FVO course wins for Janine Inman on the W21 course, Craig Thomson on the M18 course, and a one-two finish for Hazel Dean and Louise Longhurst on the W45+ course; with many of our other runners securing top finishes. Marcus Pinker, Abi Longhurst and Frances Brown were all in the top three on their courses.

This is FVO's fourth win in a row and sixth win in the past seven years. Well worthy of note also is that this run of success is a real club effort and not just something achieved by a small minority of club members. Only three of our counting 13 runners this year were also in the counting 13 for our victory one year ago (stand up Fiona Berrow, Gary Longhurst and Craig Thomson - congratulations!).

So congratulations to everyone in the club - and particular thanks to anyone who ran for the club at the qualifier in Devilla last month and/or at the final yesterday. Five in a row next year anyone?!

Scoring members of the club were: