The last two years have seen the Jim Heardman trophy awarded to very strong candidates, with Gareth and Jan the recipients two years ago and then Gary last year.

This year is no exception and I am delighted that we have another very worthy winner. This year the Jim Heardman trophy for services to the club is awarded to David Nicol.

What many of us see of David's contribution to the club is really only the tip of a very large iceberg, there is all the activity that club members see - plus another huge amount hidden away behind the scenes......

We see David today as FVO Secretary, but many people don't realise he took on that mantle as long ago as 2004 (succeeding another long serving secretary in Susan Sinclair-now-Hensman), not do they see all the hidden work with policy documents, minutes and the like. Even long before 2004 David was an active member of the club for many years - perhaps luckily for him I have not had time to track down any photos of past FVO dinner dances! We see him helping the communication to the club sending out emails, but we don't see the huge amount of work going on behind the scenes filtering all the correspondence and keeping communication worthwhile and relevant We see him carrying out tasks as our webmaster, but beyond that he and his sons have done a massive amount of development work on the site. Most recently over Christmas David spent 40 hours re-building servers that run the web site and mail server - the result is an excellent professional looking web site. We saw him every day at the 6-days working alongside the paid workers from SportIdent, but most people are unaware of the vast volume of work he has done for the past two 6-Day event in co-ordinating the thousands of entries and the allocation of start times for each day. We see him looking after the SportIdent kit at most FVO events - but not necessarily the associated set up behind the scenes both beforehand and on the day. We see him do all that - and somehow we have still persuaded him to be the organiser for the FVO day at this year's JK! He has put in a lot of work already and very soon will be looking for all our support with staging Day 2 at Dunalistair.

And even better he's still on the committee!

In summary the club wouldn't be where it is today, and run so smoothly without David's efforts, thank you on behalf of the committee and club members for all your work and support - and congratulations on this well-deserved trophy. 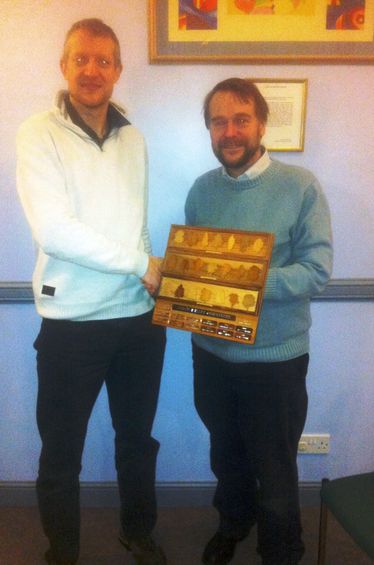