There were world class competitors on show at the Scottish Orienteering Championships which took place over the weekend of 23 and 24 May 2015.

The individual competition, at challenging Ardnaskie, near Taynuilt, saw international squads from Switzerland and Norway take on Scotland’s finest as part of their preparations for the World Championship near Inverness in the summer. Unfortunately, FVO’s top performer, Graham Gristwood, was unable to compete due to illness, however, there were several championship-winning results for FVO runners.

Steve Feltbower won M35 comfortably, if you discount the mark set by ineligible Swiss athlete Francois Gonon, that is. This was a great reward for Steve’s training efforts after the flashes of pace he has shown in the season so far. In M40, things were much closer with Ben Stansfield pipping clubmate Jason Inman by just 26 seconds after 8 kilometres of hard running. In M55 there were no surprises as Martin Dean recovered from recent injury and illness to take the top spot. Martin thought it was, “Rough and tough, but really good!” Finally, for the gents, Dave Coustick continued his excellent season in M70 with a 5 minutes victory on his 4.3km course.

In the ladies, Lizzie Stansfield got back to winning ways with a dominant performance on the W14 course, although she couldn’t match the 25 minutes lead that Janine Inman had on the W35 course. Beccy Osborn showed good form with the win on W40 in 64 minutes and Hazel Dean ran strongly in the competitive W50 course to pip Grampian’s Carolyn McLeod.

Sunday saw the relay competition at Inverawe and again FVO were right in the mix. The Scottish Relays operate under a rather complex handicap system, but there were podium positions for FVO4 (Ben Stansfield, Jason Inman and Martin Dean), FVO10 (Peggy Purves, Dave Coustick and Rona Molloy) and FVO Junior Flyers (Ben Parkinson, Jamie Goddard and Clare Stansfield). 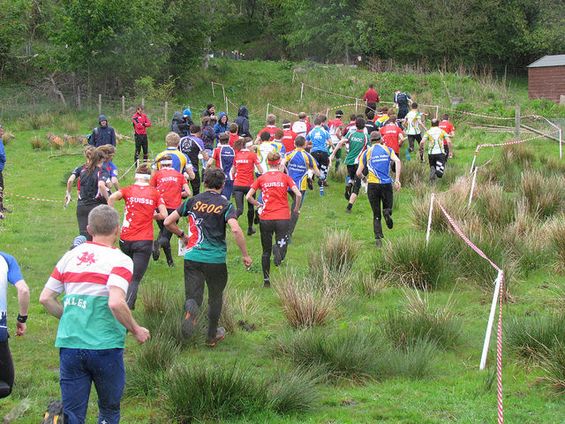