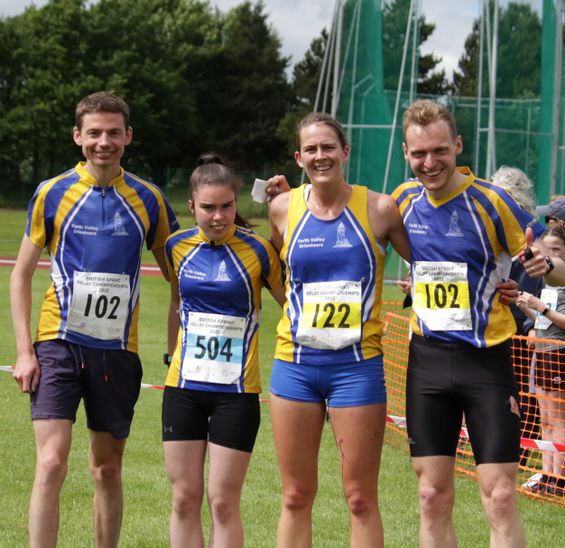 FVO Flyers had a sensational victory in the British Mixed Sprint Relay in Leeds, to clinch the overall British Relay title for 2022.

Promising junior Scarlett Kelly was handed the honour of leading the team out, and wasn't disgraced by a time of 19.11 for the opening leg. Chris Smithard took over, and had the team right up in contention, with the 3rd quickest time on the 2nd leg (14.03).

Kris Jones blew the race apart on the 3rd leg, as he carved 37 seconds out of GB team-mate Jonny Crickmore, posting the quickest time of the day (12.51), as early leaders Aireienteers crashed out on a mispunch.

With the non-competitive New Zealand national team now in the lead, it was left to Grace Molloy to chase down EUOC's Rachel Brown, with a 16 second gap to the students, and Grace delivered the goods by more than a minute, with the 2nd quickest closing split (14.44) to come in 49 seconds behind New Zealand, but 1.06 up on EUOC.

Through her involvement on the champion team, Scarlett becomes, at 14 years old, the youngest-ever British elite relay champion, breaking the record set by Grace in 2015.

The Under 16 junior team has been the form outfit of 2022, and added a second gold medal shortly afterwards. Sam Hunt went out hard on the opening leg (12.29), and came in 2nd, four seconds behind LEI, who had front-loaded their team.

As` LEI faded, it became a battle between FVO and SYO, and Rebecca Hammond got her nose in front in the closing stages to touch home first (13.13), six seconds up. If there was any doubt in the result, it was quickly dispelled, as James Hammond went off like a train, smashing his way to a 2 1/2 minute winning margin (10.58 for the leg).

The day was rounded off with a battling silver medal performance for the Veteran team. SYO looked to be the pick of the pack in the race, but there were a number of other outfits with strong form, and Roger Goddard did well to come home 2nd off the opening leg (16.15). 2021 indivudual champion Rachel Kirkland kept the team right up there, with the 2nd quickest split on the middle leg (18.04), 50 seconds off the lead, but only five seconds off the top time. Jason Inman took to the task of pursuing a rapidly-vanishing SYO with a vengeance, and maintained the silver medal position through to the finish (17.19 for the leg).

The FVO men won the overall British Relay title with 38 points, from two wins and two 2nd places, by two points from EUOC, with Octavian Droobers 3rd on 23 points. EUOC was out of sight in the Womens competition on 37 points, but FVO's women got their noses in front in the closing stages to hoist themselves above EUOC II and SYO into 2nd place.