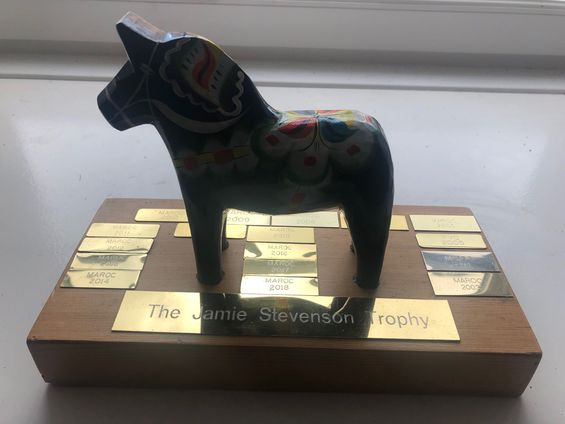 The FVO juniors produced a team performance not seen in a generation, as they won the 2022 Jamie Stevenson Trophy to end MAROC's 15 year dominance of the event.

A strong team was assembled for the event on Moncrieffe Hill, with a number of new members, fresh from the Scottish Schools festival, having their first outing in FVO colours, and team management was quietly confident that a good performance may be on the horizon.

The team was dealt a blow pre-race, when Eilidh Connor, who was projected as one of the potential points scorers, had to withdraw as a COVID contact. However, this meant that someone else would get their chance to make their mark, and be the hero of the piece.

Hopes were high for the Yellow girls team, which on paper had two of the top three W10s in Scotland. Hannah Inman was the first finisher on any of the courses, in a quick 15.55, and the first points of the daywere secured. Esme Finch was close behind (19.45), and already there was a buzz around the finish tunnel when the FVO name came out atop the early leaderboard.

Peter Owen was selected on the Orange course this time, to add strength to an area of perceived weakness, and used all his know-how gained from more technical courses to put together a string of fast splits, and come home hard in 25.32. Four finishers in the house, three of them from FVO, and two topping their class; maybe, just maybe?

Fraser Cheyne was the pick of our runners on Yellow boys, as, flying solo for the first time, he recorded a time of 29.40 to overcome the national champions at both Long and Middle distances to take 2nd place overall.

As more and more runners finished, it was shaping up to be a battle between FVO and INVOC for top spot. Both had more or less the same number of competitors on the longer courses, so it was a matter of who could post the better overall times.

James Hammond was the final starter on any of the courses, and when he came back in under half an hour on the Green course, we had our 3rd set of maximum points bagged, and were four points up on INVOC with one course remaining to complete.

It then boiled down to the Light Green girls course, and the battle between Scarlett Kelly and Iona Scott, the top two W14s in the country. Scarlett was first out of the forest, a time of 34.07 good enough to take the intermediate lead in the class. Iona had started nine minutes later, and was spotted going fast through the latter stages of the course - but how fast?

As she approached the run-in, it was going right down to the wire, but despite a valiant effort, Iona came in three minutes down, to give Scarlett the points that sealed the overall victory. The icing on the cake was a solid 3rd place in the class for Rebecca Hammond (46.04), who bounced back from dropping five minutes on the opening leg to finish 14 minutes, and six places better off than INVOC's final runner.

Although each and every one of our runners on the day was a superstar, from Jamie Goddard in his 10th Jamie Stevenson Trophy to Catriona Downie in her first , special mention must be made of the contribution made by Matthew Inman, who didn't mention that his arm was in a cast, having been broken two weeks ago.

Although he didn't finish, and so didn't add to the team score, Matthew gave up his run mid-course to help some youngsters who were lost, including FVO's Alexander Neave, who had picked up the wrong course map, and was trying to fight his way round the Light Green course. Alexander was able to return to the start, reset with the correct map, and produce a strong run for 3rd place on Orange (38,37), which equals our 6th-best score.

What a day - what a team performance! 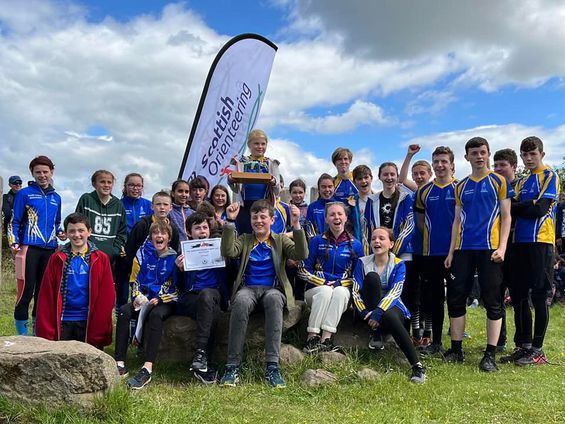