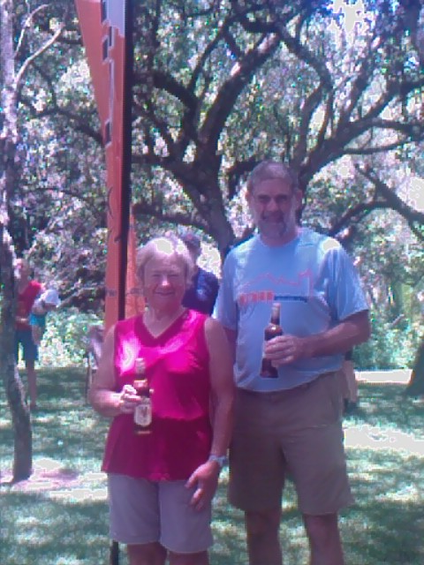 A report from our South Africa correspondent - Ted Finch

FVO and ex FVO and FVO friends went head to head in the M21E this week in some superb terrain around the old small mining town of Kaapsehoop.

No one is quite sure how or why but Nick Barrable, Dave Peel, Jon Cross and Martin Ward all ran the tough M21E program. (Other courses and classes were available.)

Not so far behind, the older legs of Jon Cross Forth Valley Orienteers finished in 15th with 2821 points. Martin Ward also scored 2821 points finishing 16th. (Edit by Jon Cross: I feel compelled to point out that I got 2821.9 points for 15th! This 0.9 points was the equivalent of 2 seconds on the final (sprint) day - so pretty close between me and Martin after nearly 8 hours of racing!) Dave Peel was declared non competitive for Day 4 as he was also the mapper. He ended up with a respectable score of 2488 based on 3 scoring races.

In other classes oldsters Ted and Val Finch were on form in the M60 and W60 classes.

Ted had a 1st, 2nd, 3rd and 3rd to finish 2nd overall and Val with a 1st, 2nd , 2nd and 2nd also finished 2nd overall. Prizes of Marula were happily received. In W45 Lesley Ward SYO finished 4th overall and Marie Claire was 7th based on 3 scores as she suffered an Emit Bric failure on the last day.

The South Africa 5 Days is set to repeat at New Year 2016. Although a tad long to get there the small but well organised event is well worth it, Perhaps start saving the pennies now.