FVO Up for the Cup 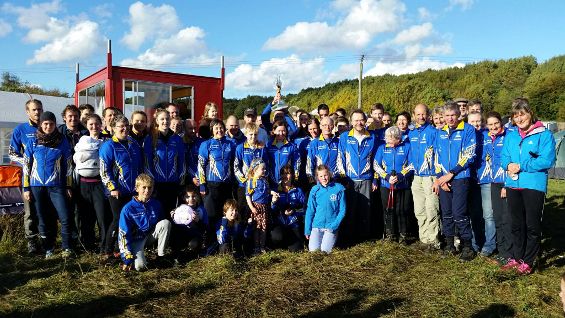 Defending champions Forth Valley Orienteers scored a comfortable victory in the Scottish qualifier for the 2017 Compass Sport Cup over the sand dunes at Tensmuir Forest.

This was a much-changed FVO team from the one that won the Compass Sport Cup in October, with no fewer than 14 of the 25 points scorers from the final unavailable this time. However the Stirlingshire club demonstrated its strength in depth with wins in eight of the eleven classes on offer, and a massive 70 point victory margin over nearest challengers Moravian Orienteers. To put the result in perspective, the maximum number of points available in the team-based event to any one club is 2475, and FVO scored 2459. Only Bristol Orienteering Klubb, who had the luxury of a head-to-head battle with North Gloucester managed to accrue more points in the qualifying round.

The victory was built on the solid foundation of sterling performances from the veteran mens and womens teams. Not only did they take the maximum 394 points from each class, but they filled the top of the leaderboard to deny valuable points to opponents Moravian and INVOC. Fiona Berrow further extended her record as the club's all-time top points scorer in the Compass Sport Cup with a ten minute winning margin from 3rd place Nikki Howard (Moravian), while Peter Molloy had the most decisive result of the day, finishing nine minutes ahead of Moravian's Daniel Campbell in the Junior Men's category.

The rich vein of form extended down to the social classes, with Ian Hendrie (3rd in Light Green), Andrew Twigg (2nd in Yellow), Rachel Godfree (1st in White) and Emma Godfree (3rd in White) having fine runs to back up an excellent day for the club.

The athletes who scored decisive points on the day were

There are 26 scores listed, although only the best 25 count for points. Nicola Gardner and Neil Kitching were tied on 95 points as the "lowest" scorer on the total, so either can be considered as the final contributor.

Attention now turns to the 1000 mile round trip to Virtuous Lady, Devon, for the final in October where FVO will be seeking a third consecutive win in Britain's premier club competition.