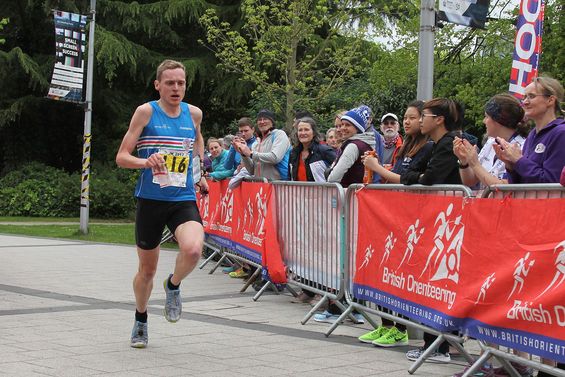 Kris Jones went off as the highest-seeded athlete in the elite mens' class, and he lived up to the pre-race billing, taking a 20 second margin over international team-mate Ralph Street to successfully defend his sprint title. Chris Smithard made his long-awaited debut in FVO colours and will no doubt have interested the national team selectors with his 6th place finish (14.43). Having made the event map, Graham Gristwood declared himself non-competitive for the event, but opened the course with a quick time of 15.39, which established a lead lasting well into the field, and which would have been good enough for 11th place overall.

Despite being the defending W16 champion, Grace Molloy didn't benefit from a seeded position this time, having made the transition to the W18E class. However she laid down an excellent performance of 18.38 from the middle of the field, and led the class until the final athlete, TVOC's Fiona Bunn snatched the victory to leave Grace with the silver medal this time.

The focus on day 2 turns to the Middle distance races at Ambersham Common, with a host of FVO athletes entered for what promises to be a great weekend of racing.