JK Day 3 - Grist(wood) to the Mill for Graham 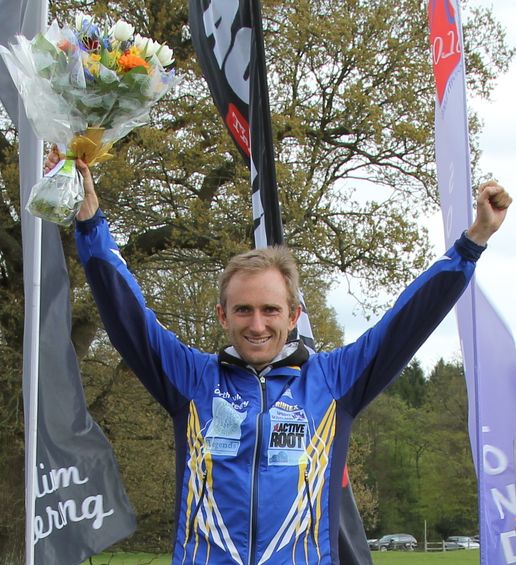 For the first time, the JK organisers reversed the order of the races, with the long distance event as the closing event of the individual programme, and this certainly seemed to suit Gristwood, the reigning British Long Distance champion. A sound start preceded an excellent middle portion of the race and an error by Street at the 12th control put the local runner in front for the first time. Late pressure from team-mates Kris Jones and Chris Smithard was repelled, and Gristwood sprinted home in 87.42 for the win. Kris Jones was 3rd and Chris Smithard 5th, to give FVO three of the top five places, both on the day and in the overall standings.

Gristwood was joined on the top step of the victory podium by two other FVO athletes. Peter Molloy held first place in M16A until the final two runners pushed him back into third place, but an excellent middle distance run on Saturday was sufficient to hand him the title in his first year in the age class. Fiona Hendrie started the W55S class in second place, but an early mispunch by overnight leader Debbie Charlton (SMOC) ruled her out of contention, and despite a fierce late challenge from Ireland's Mary O'Connell, Fiona held on for the win, adding to her Welsh 5-Day victory from 2016.

Lizzie Stansfield won the W16A Long race in 77.40, but will rue the 19 seconds lost on the last control which meant overall silver rather than gold. Grace Molloy cemented her place at the head of the W18E leaderboard with her third silver medal of the weekend, to make a strong claim for a callup to the GB Junior team for this summer's European Youth Championships. Grace's time of 48.26 gave her a clear gap over third place, and was bettered only by Thames Valley's Fiona Bunn.

In a closely contested class, Rachel Hendrie captured her second silver medal in W20S (53.36) to take the overall second place, while Roger Goddard took overall bronze in M40L (76.12) as he repelled the challenge of Jeremy Edwards (Southern Navigators).

Outside the medal positions, Jamie Connor was 7th in his first JK Festival in M10A, Ben Stansfield was 5th in M45L, Kirsty Flint 7th in W12B, Clare Stansfield 9th in W18E, Fanni Gyurko 6th in W21E and Beccy Osborn 9th in W45L.

The festival closes tomorrow with the relay races at Pippingford Park, East Sussex, with FVO seeking to defend their titles in both men's and women's elite races.