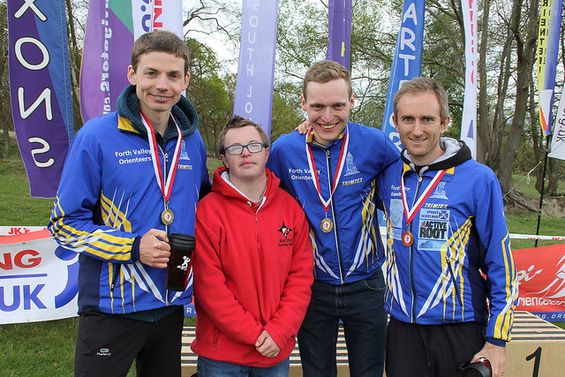 FVO Flyers produced a superlative display of front-running to retain the Mens Trophy at the 2017 Jan Kjellstrom International Festival of Orienteering and close out a memorable weekend for the Stirlingshire club.

Flyers were able to call upon the services of three of the top five athletes from the individual competition, and started as overwhelming favourites. Chris Smithard led the team out and handed over to Graham Gristwood nine second off the lead, which was held by Oxford University's Jamie Parkinson. In a last-minute lineup change, it was agreed that Gristwood would take on the shorter middle leg, and leave the longer final leg for sprint champion Kris Jones to inject some end-pace if required.

Gristwood, the overall 2017 JK champ, ate up the yards, and returned to the arena 40 seconds up on a fast-gaining Jonny Crickmore (Edinburgh University). With Jones restored to the position that saw him take gold at the 2016 World University Championships, he was able to take the front of the race and romped home to the adulation of the large crowd with a 28 second lead over Edinburgh University's Sasha Chepelin in 2nd place. Nottingham Robin Hoods' Peter Hodkinson filled out the podium, but was a further 41 seconds behind Chepelin.

FVO had mixed success in the senior races. The womens team of Cathy Tilbrook, Rona Molloy and Beccy Osborn tokk the silver medal behind West Cumbria, with the focal point being an excellent middle leg by Rona Molloy to move the team from 7th to 1st at the final changeover.

The senior mens team of Roger Goddard, Brad Connor and Ben Stansfield thought they had emulated the women with 2nd place, but it emerged in the arena that the SI Air technology had failed to register Goddard's punch on the 12th control after he had finished the leg in 1st place, and the team was relegated. Brad Connor commented "It was a bit of bad planning to have a control on a straight line, and if Roger had had an SI Air card, all would have been well. We don't need a medal to confirm we had a decent run today."

The two relay medals brought Forth Valley's haul for the four days of competition to 24, including 10 gold medals, and certainly bodes well for the British Championships in three weeks time.

Full details of FVO athlete performances over the weekend: