Round and Round the Ragged Rock 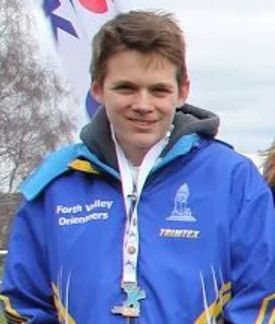 The 2017 orienteering season was opened in great style for Forth Valley Orienteers, with several club athletes enjoying success at the three-day EUOC Big Weekend in Edinburgh.

Dan Stansfield posted the first podium place of the campaign with 2nd place (21.44 for the 4km course) on the long course at the Fight with the Night sprint around the university's Kings Buildings. Dan led the field to the 24th control, but an error there saw Jonny Crickmore run on for the win. Peter Molloy was a most creditable 20th (28.26) in the 91 runner field, while Grace Molloy was 2nd female (28.45), 18 seconds down on fellow GB squad member Jennifer Ricketts. In the short course (2.6km) event, Fiona Hendrie was 19th (27.13)

The following day saw the first round of the BTO Solicitors Scottish Urban League, and Peter Molloy was victorious on the Junior Mens course, Grace Molloy was 2nd in the Open Womens class, while Lizzie Stansfield was 4th in Junior Women. Best amongst the senior athletes were Roger Goddard (6th in Veteran men) and Fiona Hendrie (6th in Super Veteran Women) while Ben Stansfield was 18th of 75 starters in Open Men, as the oldest competitor.

The weekend was rounded off with the Classic race round Holyrood Park, Edinburgh, and this saw Peter Molloy take his second victory of the meet, in the Blue class. Peter's time of 60.10 for the 7.3km course was 40 seconds faster than FVO new boy Chad Harrison, competing in his first official event in club colours. Grace Molloy was 4th overall (63.13), and 1st female finisher in the class. James Hammond won the Orange course by over four minutes in 33.53, Ben Parkinson was 2nd on Short Green in 33.43, Pierre Lardet 3rd on Light Green (45.04) and Lizzie Stansfield and Jamie Connor were each 4th, on Green (48.56) and Yellow (33.02) respectively.

The next outing for local athletes will be at the ESOC Sprint, at Bughtlin, Edinburgh on 5th February.