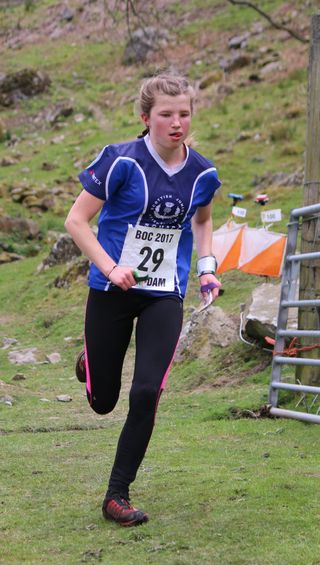 Three of Forth Valley's talented young athletes have won Great Britain callups for this summer's international season, as Peter Molloy and Lizzie Stansfield were named for the GB Talent Squad camp, and Grace Molloy celebrated a triple selection for the major international competitions.

Grace is currently the number two ranked athlete in the UK in both Under 18 and Under 20 classifications, despite being in her first year at Under 18, and this week added the British Under 18 Championship title to an already impressive trophy cabinet. Double Gold medalist at last year's World Schools Championships in Turkey, Grace's first port of call will be the European Youth Championships in Slovakia, in early June. The following week, she's off to the Junior World Championships in Finland, before rounding off the summer with a trip to Austria and the Junior European Cup.

The World Championships selection came as something of a surprise to Grace, who had been targeting the 2020 championships as a potential medal target. She commented "I'm delighted with the selection, as it gives me the opportunity to compete against the best in the world at my age group. As I'm still young, I'll have another three chances to compete at the Junior World Championships, so my main aim this year is to gain experience of competing at this level, and of the intensity of the competition schedule at international level".

The World Championships features five races in six days, and on current ranking, Grace would be in line for selection for all five disciplines, sprint, middle and long distances, as well as sprint and forest relays. She continued "This range of competition will enable me to race in new and varied terrain, and will greatly aid my development as an orienteer".

As first season athletes in the M & W 16 class, Peter and Lizzie don't even have a BOF ranking, but have been prominent at the top of the class all season, with both taking silver medals at the British Championships, as well as gold medals at the Jan Kjellstrom International Festival, Peter's coming in the middle distance, and Lizzie's in the Long. With British Orienteering taking a strategic decision this year not to send under 16 athletes to the European Youth Championships, there is no competition outlet for this age group at international level, but from a long-term viewpoint, these athletes will form the basis of Great Britain teams for years to come, so receiving early recognition is a clear sign of intent on the part of the selectors to test the mettle of these talented youngsters.

Lizzie said "I'm very pleased to get this callup. Many of those who have been selected are good friends, and it will be great to spend some time with them, as well as improving my orienteering with some good coaching."