All Right on the Night 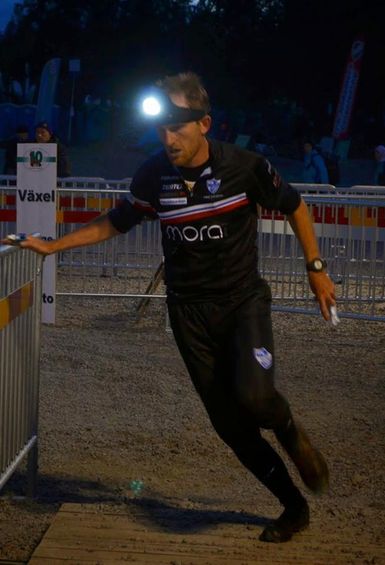 Graham Gristwood, King of the Night

Since returning from his sojourn in Sweden in 2014, GG has been the undisputed "King of the Night" in the UK, and the fifth night crown came in a time of 62.43, four minutes ahead of local hero Ben Mitchell, with former FVO stalwart Nick Barrable 3rd in 70.48. Marcus Pinker was 6th in 83.21.

This was one of three British Night titles to fall to FVO athletes, on a fine night for orienteering. Dave Godfree won the M40 title by a whopping ten minute margin (77.17) and Jason Inman got his name on the M45 trophy again, coming home in 62.18, having taken bronze last year. Brad Connor won his first-ever individual medal at national level, staying tight to the pack throughout the race, and coming good in the latter stages to take the M45 bronze medal in a time of 74.19.

Earlier, there were four national titles for FVO at the Scottish Night Championships in Glasgow. Hazel Dean was most impressive in winning W45, running up two classes, and with a 9 1/2 minute victory margin, finishing in 43.44.

Fraser Purves successfully defended his M45 crown from a challenge by Clyde's Patrick Walder, returning in 45.46 for the win. Ben Stansfield took the spoils in M50, a time of 46.21 being five minutes faster than the field. And Martin Dean added another Scottish Night trophy to his collection, going round in a rapid 37.57 in the M60 class.

Lizzie Stansfield came close to making it a full house of titles for the local club, but was pushed back into 2nd place in W16 by Alice Wilson.