FVO has SOUL in Dunblane 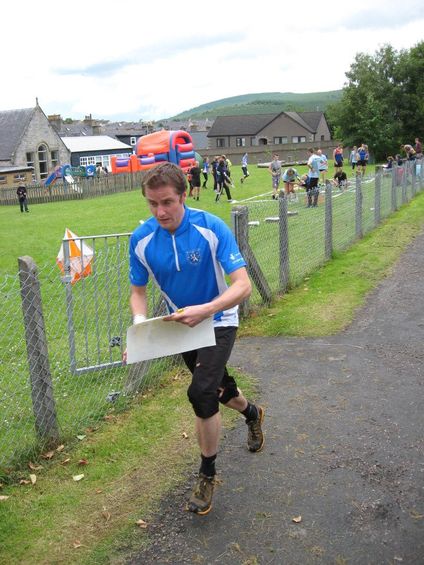 A minor case of atmospheric dampness didn't put the dampers on what was a great day of competition at the 8th round of the BTO Solicitors Scottish Orienteering Urban League in Dunblane.

Organiser Ben Stansfield pulled a masterstroke by erecting the club tent to act as a start tunnel, enabling the pre-race protocols to be run while keeping athletes dry, and planner Hazel Dean set out a superlative set of courses with route choices aplenty.

Forth Valley athletes were to the forefront in many of the classes, in their home race, and Ross McLennan was the pick of the bunch, winning the "elite" black class by 8 1/2 minutes in 47.59. Gary Longhurst took the honours in Mens SuperVet in 40.29 and was headed on the Blue course only by GB athlete Claire Ward, and Peter Molloy led a logjam of star performances on the Junior Mens course, taking the win in 17.28, with Pierre Lardet 3rd (23.55) just ahead of Jamie Goddard (24.39).

On the womens side, there were 2nd place finishes for Lizzie Stansfield (Junior Women - 22.35) and Sarah Tullie (Womens Open - 55.42), while Louise Longhurst and Cathy Tilbrook finished just outside the podium places in Veteran Women, Louise placing 4th in 47.46 with Cathy 37 seconds back in 5th spot.

One of the highlights of the entire day was an innovative indoor "Chair Orienteering" challenge, which was dominated by the youngsters of Interlopers, with Jamie Goddard best placed of the local athletes.