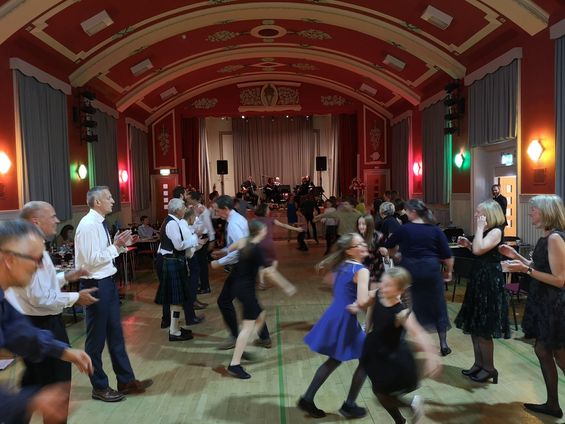 Forth Valley Orienteers went all '21st century' to deliver a very successful and unique solution to delivering one of the major components of the club's calendar.

The annual Dinner Dance wasn't possible, given the current COVID restrictions, but for many members this is a key part of the club's activities, with several saying it's their main reason for being in the club in the first place, so the awards ceremony moved online this year, with over 80 members joining from locations all over the UK, and, in one case, continental Europe.

Rona and Jonathan Molloy played hosts to the evening, and the festivities kicked off with a quite excellent film clip, produced and directed by Rebecca Hammond, which featured a host of athletes searching for club President Jen Leonard, who had (allegedly) been abducted by our rivals in SYO.

Dancing took place, and there were quizzes (won by club quiz champions the Alloa Hensmans), a silly hat competition, and a "blind" drawing contest.

One of the key features of the Dinner Dance has been the award of trophies won during the year, although with the Club Championships still to be held, and no competition in either the Wednesday Evening series or the Sprint series this year, there was a gap to be filled in proceedings.

This was effectively done with the recognition of the Colour Standards obtained by some of the FVO juniors over the last 12 months, with no fewer than 30 junior athletes amongst the recipients.

Two of the principal annual awards were able to be made however, and club captain Jon Cross highlighted the achievements of some of the main contenders for both the Most Improved Junior and Athlete of the Year awards.

In the Most Improved Junior category, there was keen competition, with both Lucy Hensman and Rebecca Hammond having successfully transistioned to the Green class this year, while Andrew Twigg and Louis Chapoy were mentioned as athletes on the rise. Katie Hensman and Eilidh Connor were the pick of the younger athletes, with both having had success this year on Orange courses.

However, the Most Improved Junior for 2020 was deemed to be Sam Hunt, who has dominated the Green class in local events since Lockdown, with five straight victories through September and October, and has been named as part of the ScotJOS squad for 2021.

Assessing the Athlete of the Year proved tough, with no international races this year, and a truncated programme of major domestic events that saw only the Scottish and British Night championships, and the Scottish Middle Championship being able to be held before Lockdown ended the season prematurely.

Amongst those in contention were national elite champions Mark Nixon (Scottish Nights) and Clare Stansfield (Scottish Middle), while Graham Gristwood won his 7th straight British Night crown. Also in the reckoning were Roger Goddard (M45) and James Hammond (M14), who won their age-group class in both the Night and Middle distances, and Jegor Kostylev, who set out with the ambitious plan to run down every navigable path in his home town of High Wycombe during Lockdown, and achieved it with 24 hours to spare before relocating to a new job in Norway.

The 2021 Athlete of the Year, however, is Fanni Gyurko, who has shown her form in a variety of terrains, taking more than three minutes off her PB in the Seville Marathon, and then coming within seconds of posting the course record for the Lairig Ghru Race.