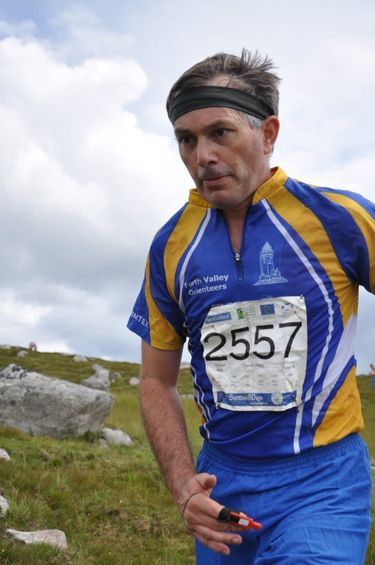 Trevor on the course

2016 was another successful year for FVO, and much of what follows could have been copied from Roger’s report for 2015, but with some exciting new developments.

As a club, and as individuals, FVO had a remarkably successful 2016. We successfully defended the Compass Sport Cup. This achievement began in March when we hosted the Scottish heat at Dumyat, and combined an excellent event (thanks to Marie-Clare for organising and Fraser for planning, and to everyone who helped on the day) with qualifying for the final. The final was in South Yorkshire on SYO’s home terrain, but in the end we won the competition fairly comfortably. Jon Cross ensured that we had the strongest possible team who delivered some exceptional performances across the age classes. We were certainly the best supported (ie noisiest) club.

Jon’s quiz on the Saturday evening reminded us all just how many people have scored points for us in finals over the years, with even more having contributed to qualification each year. We also won the Scottish Inter-Clubs trophy this year, helped by a new format based on performances at the Scottish Championships.

Our juniors came second (again) in the Jamie Stevenson Trophy – a great effort, and we are getting closer to ending MAROC’s dominance in the event.

At the major relays across the UK, FVO was once again prominent with the following results:

In domestic races, individual winners were:

Many others achieved top 3 places in major races, and a lot of people delivered performances that exceeded expectations throughout the year. Uniquely, FVO provided runners for all 4 home countries in the Senior Home Internationals.

In a very strong year, the FVO Athlete of the Year for 2016 is Janine Inman who achieved a clean sweep of major titles. Congratulations to Janine and all the club champions.

Thanks also to Lindsey Hensman for co-ordinating our trophy engraving and filling in some gaps in the trophies, and to Steve Scott for compiling a database of past winners.

Starting with the Compass Sport Cup heat (noted above), FVO put on a wide-ranging series of events in 2016 – results for 30 events are on the club website. The series of night events, come and train (CAT) events, and Wednesday evening (WEE) events gives many opportunities for orienteering on high quality maps in the local area. We have begun a series of Club Nights when there are no other Wednesday events, and look forward to these continuing. Thanks to everyone who has helped with these this year.

We also provided much of the organisation for the Junior European Cup in the autumn – thanks to Jason for organising this and bringing the next generation of elite world-class orienteers to Scotland. Many people helped over the weekend, and managed some unexpected complications as well. Thanks to all involved – mappers, organisers, planners, and all other helpers.

3)  Membership and Club Development   Our total membership in 2016 was 152, up from 135 in 2014. As of 22nd January, we now have 151 members. We have developed a strategy for further development of the club, which will include promoting orienteering in schools, at Stirling University, and in local communities leading to FVO growing a wider membership base and continuing to lead the development of the sport. We have been fortunate to secure funding for a Club Development Officer (interviews taking place soon, with the officer starting work sometime in the next few weeks) from Sport Scotland. Many thanks to Dawn and Hazel for leading this application and for working through the requests for amendments to our proposal that we received prior to funding being approved. Our Club Development Officer will liaise with the SOA Development Officer for the south of Scotland, Rona Lindsay, and this combination of effort should lead to some exciting new developments.

The membership has continued to grow thanks to Jen’s work as membership secretary, and the efforts of many coaches and helpers who have supported CAT and WEE events and who have welcomed and helped newcomers. Being a friendly, welcoming club is important – orienteering can be a mysterious sport to those who don’t know it, and FVO leads the way in our approach to building a club for all.

2016 has seen a step-change in our social media, website news and local media presence. Most of the credit for this goes to Steve Scott, whose writing bridges the need to explain the sport to outsiders and that to convey the excitement of the club obtaining great results. Steve is always looking for information and photos to use in his articles, so please keep him informed of what has been going on.

4) Investing in the future

The Treasurer’s report shows that we are able to sustain our current level of activity and to plan ahead to support the Development Officer post in future (a requirement of our funding). We have some new ideas for 2017, which will be a high income year due to major events, but also a high expenditure year as we invest in mapping, equipment and supporting club coaching and major event attendance.

New and updated maps are being worked on, as part of a mapping plan that Jason leads and which evolves continually as requirements change. We are looking to maintain our permanent courses (Abbey Craig; S Achray; Plean). Many thanks to Geoffrey Hensman for supporting our training and events through map printing, and we look forward to making good use of his services this year.

The major events for 2017 will require plenty of input from all of us. The organisers will be in touch shortly to request assistance – please help out in any way that you can. The April Double Dukes will showcase our prime terrain of the Trossachs, as well as showing South Achray off at its best, without bracken. We are organising the final day of the Deeside Scottish 6 Days, and as always FVO will put on a good show in partnership with CLYDE. The autumn sees us host an urban race in Dunblane, with courses suitable for all. More information will be distributed via email, the web and social media.

This year we have also reviewed the club equipment, and have invested in some upgrades with more to come. Some of this will be obvious, like a new club tent, but other critical infrastructure is more hidden. We have, for example, purchased an upgrade to the OCAD mapping software, which Will Hensman manages. We have also been able to support some junior athletes in a modest way to enable them to attend international competitions and training camps. We look forward to many more juniors gaining international selection in future, and will try to support them where we can.

Many people contribute to FVO’s successes, both as athletes and volunteers. Many of the small contributions are easily unnoticed but are essential to the functioning of the club. Thanks to everyone who has helped out in any way, and also to those who have helped orienteering generally through their work as controllers, event advisers, SOA and BOF officials and other roles.

2017 will again be exciting – we have major events to deliver, many training activities and local events, and some great events to attend. Performances in 2017 depend on individuals staying fit, training well and being supported by their clubmates. Good luck to everyone, from the Scottish Night Champs in the next few weeks through to the Glasgow Parks in December.

I am pleased to announce that the committee have instigated a new award for 2016 for ‘Friend of FVO’. This is to be awarded to an individual or organisation who have gone out of their way to support FVO during the previous year.

2016 Friend of FVO Kate Thomas (CLYDE) for her support of the 2016 Junior European Cup as organiser of the long distance race. The great success of the weekend as a whole was guaranteed by the fantastic organisation of the final day led by Kate. When she signed up to organise a SOL race, Kate didn’t need the added complications that an international race, an arena with commentary and afternoon flights for the athletes would provide. FVO takes full responsibility for adding all of this to the organisers workload, and we are extremely grateful for the support from CLYDE members and from Kate in particular.

2016 Jim Heardman Trophy Jason Inman for a long list of work to support the club: as coach, to juniors and senior elites alike; as club coach, organising training activities and events; as mapping officer, finding new areas, securing grants, working with mappers and making the club’s development work possible; as organiser of large events, bringing JEC to Scotland twice and inspiring the club and others across Scotland; as a committee member having ideas, taking the initiative and making things happen; and, as an inspiration - training, despite his username, orienteering well and having competitive successes. Of course, Jason has also shown huge patience dealing with a range of outside organisations, including his employers, and must be a nightmare as a neighbour (“could you help with my latest idea? It really won’t take long!”). Congratulations and many thanks on behalf of all of FVO.

Trevor on the course